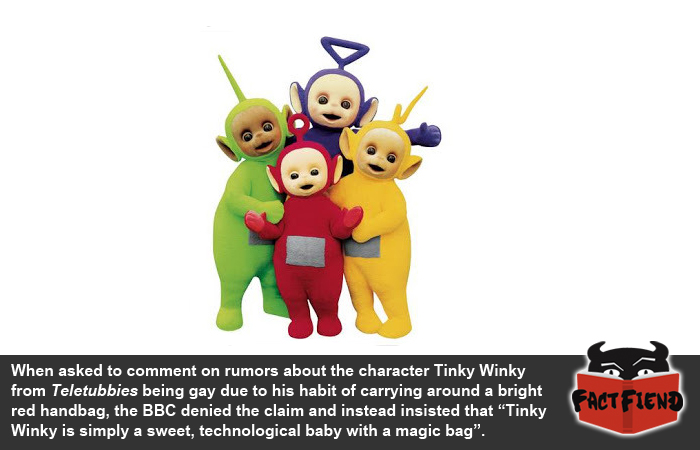 For most people the Teletubbies were an incredibly annoying, but mostly harmless group of terrifyingly fabulous alien toddlers who brightened the days of children in the 90’s. For some people though, they were one of the biggest threats to children since flying dingos.

The biggest criticism against the Teletubbies came from a bunch of asshole pressure groups filled with concerned parents who felt that Tinky Winky – the purple one – shouldn’t be on a television show aimed at children because he was obviously gay.

These groups claimed that Tinky Winky’s penchant for carrying a bitchin’ bag, coupled with the fact he’s bright purple was a pretty clear indication that he was at the very least, a little bit gay. Some also called into question the shape on Tinky Winky’s head which they felt was reminiscent of one of the more popular Gay Pride logos, the pink triangle. Curiously for a bunch of people obsessed with finding hidden meaning behind the characters aimed at kids and stoned adults, nobody seemed to notice the huge green dick stuck to the top of Dipsy’s head. 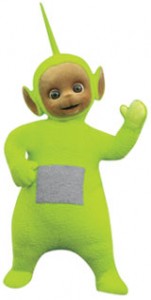 But by far the best part about this whole “controversy” was the reaction from the people distributing the show. As noted in the image above, when the rumors started to fly about Tinky Winky being gay, a representative from the BBC quashed the rumor by insisting that Tinky Winky was simply a a kick-ass alien baby with a magic bag. When the controversy reached the US, Ken Viselman, the guy responsible for distributing the show got really annoyed and when he was asked to comment on the whole ordeal, he very of matter of factly said:

“He’s not gay. He’s not straight. He’s just a character in a children’s series”

As if it wasn’t clear enough that Viselman was telling the people criticising the show to get a fucking life, he went on to say “I think we should let the Teletubbies go play in Teletubbyland and not try to define them” presumably while speaking in a tone so patronising his voice permanently lowered an octave.