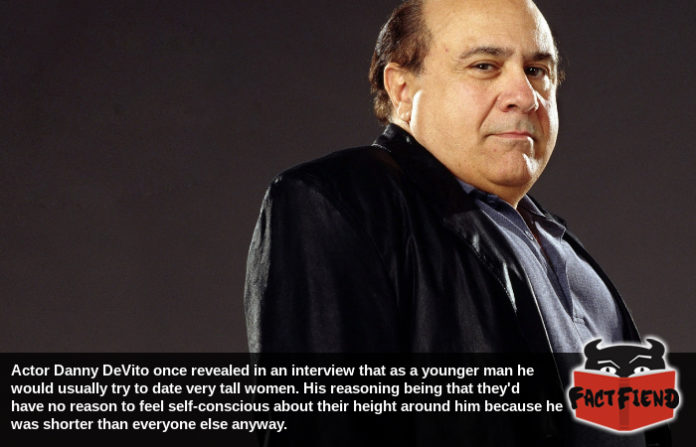 Danny DeVito is a curious anomaly of the male specimen in that he doesn’t seem to give all that big of a shit about being shorter than everyone in the room. Unlike other short men who’d feel the need to defensive about their lack of inches, DeVito has turned his diminutive stature to his advantage, using it in tendem with his inability to process giveable fucks to score both acting roles and dates throughout his life.

Self-admittedly standing just 5 feet tall DeVito was arguably the shortest working actor in Hollywood until Peter Dinklage came along and fucked up the average. Now you’d think in a world where even astonishingly handsome actors like Tom Cruise have to constantly lie about their height, a guy who looks like this would have trouble even getting his tiny hoof-like foot in the door. 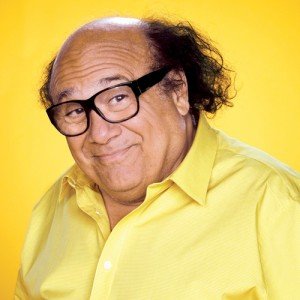 However, DeVito himself has noted that early in his career he’d get way more callbacks for auditions precisely because he looks like this. His reasoning being that “No casting director is gonna forget the 5ft guy!”. Which is a pretty brilliant point if you think about, Hollywood is filled with generically handsome men who can barely act.

All of these men have to compete with one another for the same roles and since they all have the same punchable, beardy face, their performances are going to look kind of similar. Danny DeVito’s performance on the other hand is at the very least going to be different. If Hollywood auditions were a basketball game Danny DeVito would be the guy hurling 3 pointers from the stands while other actors camped the free-throw line. Sure he’s not going to get as many baskets, but you can sure as shit guarantee someone’s going to take note of his confidence.

Which brings us quite nicely to Danny DeVito’s massive, swaggering confidence penis. The actor has explained in interviews that he’s never let his height or appearance deter him from auditioning from a role early in his career. Once wryly quipping that this kind of worked out because by an amazing stroke of luck, every character he ended up playing was about 5 feet tall anyway.

In fact, DeVito once explained in an interview that by sheer virtue of looking different from the mass of symmetrically-faced clouds of vanilla auditioning for roles as a young struggling actor, he managed to secure roles in at least two Shakespeare plays just because the casting director didn’t want to hire another bland, generically handsome white guy.

When it came to ladies, DeVito was similarly incapable of giving a fuck and while most shorter men would avoid dating or approaching exceptionally tall women, DeVito would make a beeline for them in any club he went to. When asked why his reasoning was devilishly simple, tall women make average height men feel insecure. A problem they’d never have with him because he didn’t give a shit about them being tall since everyone was taller than him anyway. As a teenager DeVito used similar logic when asking girls on dates, reasoning that like him, a tall girl would know what it’s like to feel singled out because of their height and thus, they’d have less reason to feel uneasy around one another. In fact in one interview in 2012 DeVito recalled that after he learned to dance as a teenager he never felt self-conscious about his height around women ever again. When the incredulous interviewer asked him to demonstrate this skill, despite being jet-lagged as shit and 68 years old, DeVito danced up a storm and then explained that if he were a single man, this where he’d usually get really lucky.

Although DeVito was happily married from 1982 to 2017 when he and his wife divorced, prior to this he was well known in Hollywood for being able to effortlessly attract women. In fact, Michael Douglas (with whom DeVito shared an apartment in the 70’s) once called DeVito “a babe magnet“ and maintained that he never had any issue with women as long as he was around to smooth talk them. Which is pretty fucking high praise coming from a guy who currently banging a Catherine Zeta Jones well into his 70’s.

Think about it, if Michael Douglas’ dick-game is strong enough to score with a woman like this on it’s own, imagine the kind of shit DeVito was pulling in the 70’s for this guy to hold him in such high regard. Holy shit, maybe Danny DeVito really does have a magnum dong.

Oh and it’d be remiss to not mention that time Pokemon fans petitioned to have Danny DeVito provide the voice of Pikachu in a game called, Great Detective Pikachu and his only response was “What the fuck is a Pokemon?”