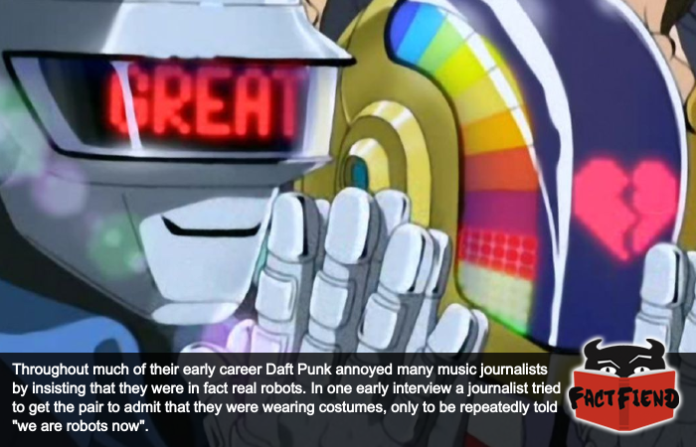 For much of their career, the French electronica duo Daft Punk cultivated and maintained an elaborate robotic facade that has since become one of the most iconic and enduring visuals in all of modern music. A gimmick the pair committed to so hard initially that it annoyed a good number of musical journalists trying to interview them.

You see, as we’ve discussed before, while Daft Punk’s robotic personas are iconic today the band didn’t always look like that. In fact, for much of their early career Daft Punk performed without any sort of disguise and even when the pair did begin to conceal their identity their efforts were decidedly half-arsed.

This changed in the early 2000’s when the duo conceived of their robotic alter-egos and decided to fully commit to the idea of being music-making automatons. At least for a little while.

To explain, prior to the reveal of their robot personas around 2001, Daft Punk were known for being incredibly camera shy and it was reportedly easier to find rocking horse shit than time to interview them. This said, when they did sit down to talk about their music, it was a pretty standard affair. This changed when started rocking up to interviews looking like C-3PO’s older, cooler brothers. 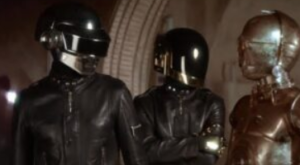 For example, during one interview shortly after the reveal of their new robo-selves, they absolutely refused to acknowledge that they were guys in costumes. Insisting there’d been an accident at their studio that caused them to turn into robots and they were just going to roll with it from that point on.

A thing it’s worth noting before we continue is that this happened during literally the first interview they ever gave in full costume and that nobody, including the interviewer knew what was going on. In fact, the interviewer, who was understandably baffled by the outfits, tried repeatedly to get the pair to explain why they suddenly looked like Swag-ass Cylons, only to be rebuffed each and every time. With one member of the group simply responding “we are robots now” every time it was brought up and the other clarifying “We don’t wear helmets; everything’s real” when he did.

Amazingly, Daft Punk kept this up for well over a decade, alternating between insisting they were robots and fucking with interviewers. Doing shit like filling a mansion with members of a nudist colony for a magazine spread trying to document what a day in the life of the band was like.

Eventually though the band, somewhat ironically, let the mask slip and revealed that the costumes were largely just to guard their privacy. Though not without admitting, half in-character, “it would not be exciting for humanity to see our features“. You know, to keep everyone on their toes.