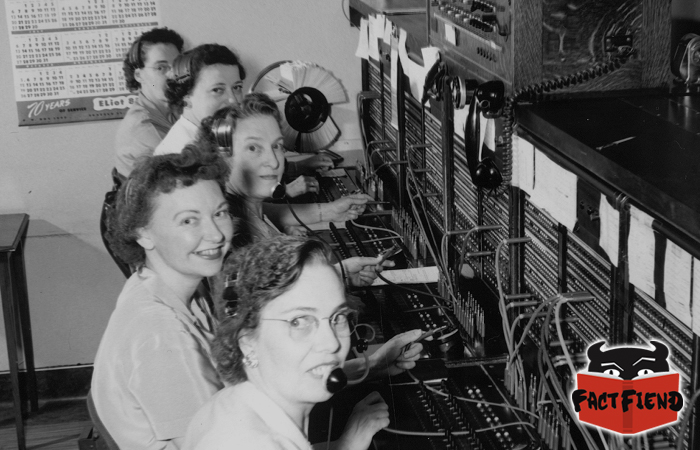 Like we did yesterday and the day before that, we’d like to apologise for the slap-dash nature of this post and its header image, the author still doesn’t have his laptop and is having to update the site through a combination of sheer force of will and clever use of his cellphone. With that out of the way, today we’d like to talk about how women were only initially offered jobs as switchboard operators because teenage boys kept dicking around when given the same job.

Though today the idea of a switchboard operator is hilariously dated and out-of-touch with the needs of the modern world, back when phones first started becoming a staple of American homes and before the invention of the automated systems that made the job (mostly) obsolete, switchboard operators were essential to communication. In a nutshell the job involved answering calls and then connecting whomever was on the line to the person they were trying to contact by plugging and plugging cords into a giant, obscenely complex board using what we assume was dark magic and prayer. It’s the job you’ve seen parodied by the media dozens of times but never really been that interested in to look-up how it works.

What is seldom shown in these portrayals though is that the job didn’t just involved plugging wires into sockets and hoping for the best, it required a very high level of communicational skill and an exceptional grasp of the English language and manners. Which is one of the reasons that switchboard operator was one of the first careers that was almost completely dominated by women. You see, when the technology first became widespread, the job of switchboard operator was the domain of teenage boys who were the only people willing to work such long hours for so little pay. However, the long hours coupled with the stoicism required for the job led to many young men becoming bored and frustrated, which in turn led to many cases of men being rude to customers, playing pranks and even wrestling in the office. Fearing that this behaviour would turn people off the fledging technology for good, companies quickly realised that women were the way forward and they began to hire them in droves.

The first woman hired as a switchboard operator was a lady called, Emma Nutt, who was hired to work for the Edwin Holmes Telephone Dispatch Company after they’d received dozens of complaints about the men they’d hired cursing at customers or generally being assholes. The customer reaction to Nutt’s calm, collected demeanour and soothing voice was so positive that the company went right ahead and replaced their entire workforce with women inside of a few years.

As positive as all this sounds, we’re not going to pretend that the circumstance around this event were all positive because to put it bluntly, they weren’t. Although women were indeed highly prized as switchboard operators due to how boss they were at the job itself, one of the other reasons women were so desirable for the position was because they worked for less money and they could be more easily controlled, which, like a lot of things back then, is total horse shit.

That said, it was one of the earliest known examples of women proving that they could do a job as good as, if not better than men, and it was all down to, in part, to a couple of teenagers who couldn’t resist making fart noises down the phone.