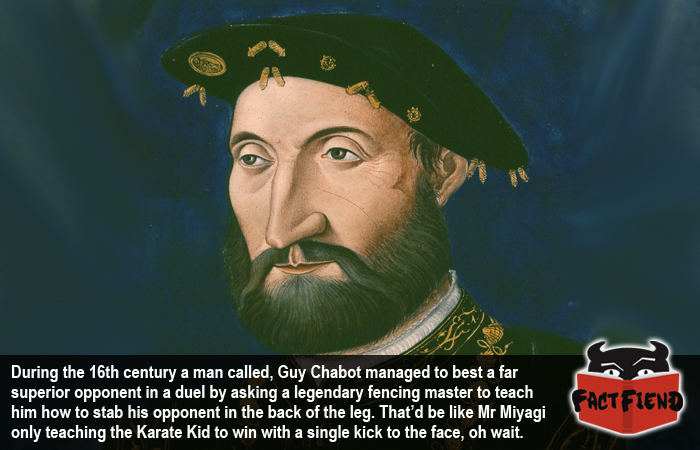 Back before they were made illegal, duels to the death were the go-to way to settle any argument, but have you ever wondered what people did when they challenged opponents who were clearly more skilled than they were? If the story of Guy Chabot de Jarnac is anything to go by, the answer is, they cheated.

To explain, in 1547, a French gentlemen called Guy Chabot de Jarnac heard through the grapevine that a dude called, François de Vivonne had started spreading a rumor that he’d been sleeping with his mother, proof of, amongst other things, that people back then were just as quick to play the motherf*****r card as people are today.

Jarnac was understandably quite annoyed when he heard this and he demanded that François de Vivonne duel him. However, the current King of France at the time steadfastly refused to grant the request, which probably worked out quite well for Jarnac since François de Vivonne was one of the finest swordsman in France at that point in time. On top of this, Vivonne was also known as a man of freakish strength who had previously ended a duel by tackling his (fully armoured) opponent to the floor and stabbing him to death.

Undeterred, Jarnoc petitioned the King for a year, each time having his request refused. It wasn’t until the King died and was replaced by someone else that Jarnac’s death wish was finally answered and he was informed that himself and Vivonne would face each other in single combat in exactly 30 days time. Which is where this story gets silly.

You see, despite the fact he’d been badgering Vivonne for a duel for several months straight, Jarnac actually had no idea how the hell he was going to beat him and the second the date of the duel was announced, Jarnac began stalling the shit out of Vivonne so that he could have time to prepare.

One of the more ingenious ways Jarnac stalled Vivonne was by constantly changing his mind about what weapons they were going to fight with. However, Vivonne was a very wealthy man and every time Jarnac suggested a new weapon, he was able to have one of his servants procure it almost immediately, which didn’t stop Jarnac changing his mind about which weapons they were going to fight with, 30 times!

Jarnoc even resorted to praying and he reportedly travelled to various monastery’s across France in an effort to convince people to pray for his victory.

Seemingly realising he’d bitten off more than he could chew and that he couldn’t weasel his way out of the fight, Jarnac resorted to finding the greatest fencing master he could find and pleading with him to teach him a technique that could best his opponent. This fencing master, reportedly a guy called, Captain Caizo, agreed and spent a month teaching Jarnac an ancient technique called “stabbing your opponent in the back of the leg“. This would be like one of us preparing for a fight against a UFC fighter by asking a rape defence coach to teach us how to properly kick a guy in the dick.

Vivonne on the other hand spent his month relaxing and feasting, because he’d already conclusively proven he could snap a man’s neck when the chips were down.

When the time to duel rolled around, news of Jarnac’s time in the mountains learning the most dickish way to fight had spread and bets suddenly began being made about whether or not the fight was going to end with Vivonne was going to be bested by a slice to the back of the calf.

In a move that surprised almost no one, about 10 seconds after the fight started, Vivonne was on his back dying after Jarnac had sliced the back of his leg clean open. He’d been bested by one of the oldest tricks in the book.

Mr Miyagi would be proud.