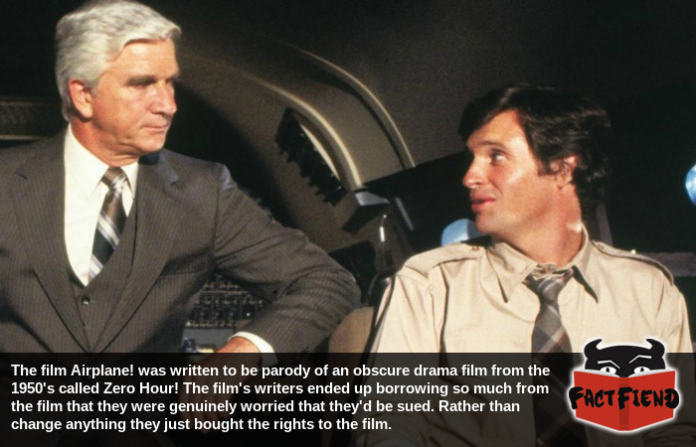 The film Airplane! is widely considered one of the funniest movies ever made and is perhaps best known for launching the (comedy) career of Leslie Nielsen. An impressive feat considering that the film was practically a word-for-word remake of a serious drama film.

Before getting into that we should probably address the fact that Leslie Nielsen was a serious actor for like 30 fucking years before appearing in Airplane! In fact, Nielsen wasn’t just a serious actor, he was a leading man and burgeoning sex symbol throughout the 1960’s. As you can plainly see from this image of him beaming pure sex out of his eyeballs into your soul. 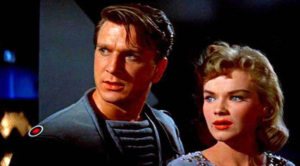 Something that probably has you wondering why Nielsen was cast in a comedy film, right? Well according to writers/directors of Airplane!, they were not only aware of Nielsen’s total lack of comedic acting experience prior to being cast in their film, it’s the whole reason they sought him out in the first place. It was only discovered after filming began that Nielsen hated being in serious movies and had always wanted to be a comedian. Something he proved during production by hiding a whoopee cushion around the set with ninja-like precision.

Moving on from Nielsen’s love of fart bags, the film’s writers, Zucker, Abrahams and Zucker, went out of their way to only hire actors known for serious roles to appear in the film. Their reasoning being that serious actors would be able to read the script’s stupidest lines with absolute sincerity, making them funnier. 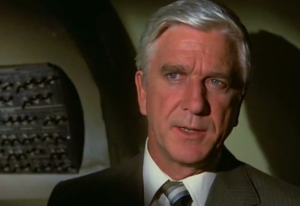 This was kind of important because pretty much the entire film’s script was lifted wholesale from a film called Zero Hour! which the writers have since described as one you could use to “teach film structure” due to how formulaic it is. Now according to the writers, they happened upon the film by accident while watching random commericals they’d recorded on VHS. A thing they’d all do to find things to parody or riff on.

Apparently the writers half-watched Zero Hour! whilst fast-forwarding to the commercials and ended up watching the film in its entirity multiple times. After a while they decided that a parody of the film would make for an interesting comedy and wrote a script that was basically just Zero Hour! with a few jokes thrown in. 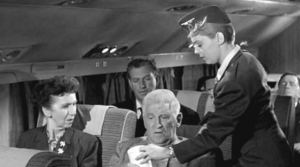 As an idea of how close the script of Airplane! was to Zero Hour! some lines in Airplane! are literally taken verbatim from Zero Hour! and are somehow made fucking hilarious thanks to the unexpected comedic chops of the normally-serious actors they hired to appear in it. The thing is, Airplane! ended up “borrowing” so much from Zero Hour! that the writers were genuinely worried they’d be sued for copyright infringement.

So, rather than risk being sued over this, the writers just up and optioned the rights to the film for $2,500, purely so that they could rip it off. A fact about the film that becomes a sort of meta-joke when you consider that nobody gave a shit about the film to such an extent, many assumed Airplane was a parody of a different fucking film. Mainly a series of disaster films called, Airport. Something that no doubt caused the writers a great deal of amusement.