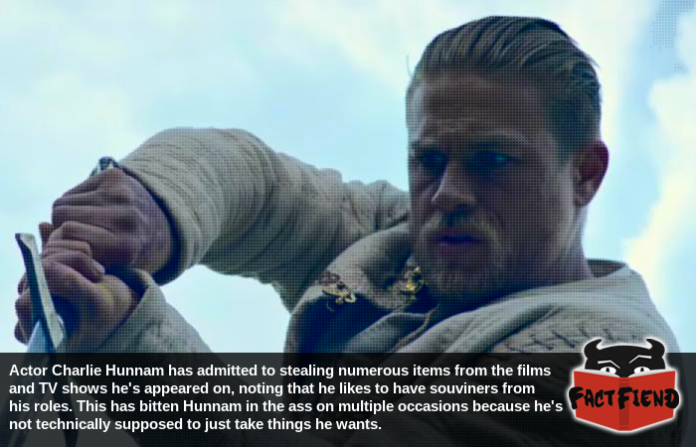 If you can say one thing about Charlie Hunnam it’s that he’s certainly, an actor. An actor who’s paid incredibly well to pretend to be everything from the pilot of a giant robot to a dickhead biker. Being paid well though hasn’t stopped Hunnam from engaging in a little on-set pilfering to find cool shit for his house because there’s some stuff money can’t buy, like Excalibur.

To explain, Hunnam is a rare example of an actor who seems to just really enjoy the world of acting and he seems to maintain a cheerful optimism about his work, even when the projects he’s appearing in aren’t exactly set to be a commercial smash or critical darling. For example consider the topic of today’s video, King Arthur: Legend of the Sword, a film that flopped harder than a wet mattress being kicked into a pool.

Now while most actors would probably be embarrassed by a film that bombed this hard, or at the very least, shy away from talking about it, Hunnam absolutely fucking loved being in the film. Largely because it let him live out a childhood dream of being King Arthur. A story he’s been obsessed with his entire life and was, like, super stoked to have realised on the big screen whilst also being paid millions of dollars. Which probably goes a long way to explaining why he looked like this half the time he was on screen. 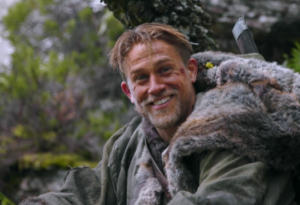 In fact, Hunnam was such a big fan of the legend that he decided halfway through production that he wanted Excalibur. The famed sword from Arthurian legend and a prop that he felt, as the guy playing King Fucking Arthur, made sense for him to keep. Since, well, it was technically his sword.

The thing is, when Hunnam casually explained his desire to keep a copy of the prop to a producer, they told him that, that wouldn’t be possible. Annoyed, Hunnam told the producer that he’d just steal it instead.

This was by no means an idle threat since Hunnam has taken stuff from shows and movies he’s worked on before, most notably the fucking bike he rode on the show Sons of Anarchy. If you’re wondering how on Earth Hunnam stole an entire bike, he explained in an interview once that he simply rode it home on the last day of filming and when they asked for it back he basically told producers “I’ve made your network millions of dollars, I’m keeping this bike.“. Apparently they never responded and the bike is still in his garage where it’s likely to stay because Hunnam doesn’t like riding it.

The thing is, despite his obvious knack for stealing props from the sets of TV shows and films, Hunnam couldn’t get his hands on Excalibur. This understandably upset Hunnam, especially when he heard that director Guy Ritchie had, had a special version of the sword forged and had planned to give him it on the last day of filming. When this didn’t happen, Hunnam reportedly badgered Ritchie for months, constantly asking him about the whereabouts of his sword until he got so annoyed he brought it to a shared interview they were taking part in and handed him it on live television. Making Excalibur the one prop Hunnam now owns that he didn’t steal or liberate from set.