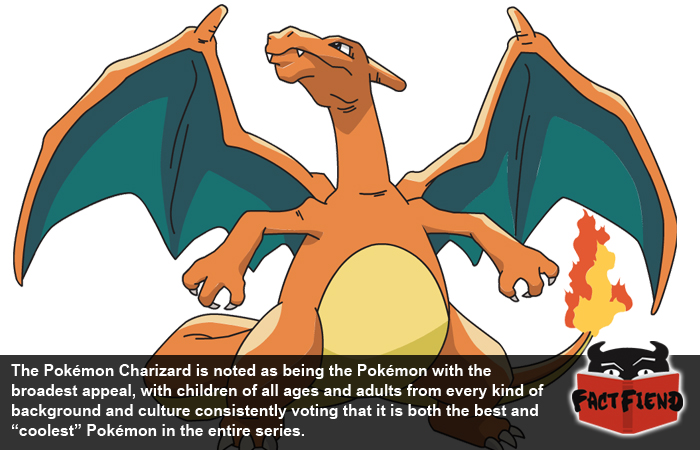 Amongst gamers and fans of made up animals that fight for love, money and glory, there are few arguments more impassioned and likely to result in eye sockets being shattered by hastily flung Gameboys than, “which Pokémon is the best?“.  Apparently though this bitter debate does have an answer, Charizard.

Before anyone jumps to the comment section to call us a bunch of dickheads, firstly, don’t do that, use a more creative insult that features a lesser known, funnier sounding part of the human body, we’re way more likely to approve those comments, secondly, if Charizard isn’t your favourite Pokémon, that’s fine, this article isn’t about Charizard being a better Pokémon, it’s about the fact it has almost universal appeal.

To explain, unlike other well-known Pokémon like Pikachu, Meowth and of course, Farfetch’d, Charizard consistently rates highly with virtually all age groups in focus testing. Even today when there are like 650 Pokémon for children to get excited over, Charizard merchandise still continues to make way more money than the merchandise of other, shittier Pokémon with less sex appeal.

According to media analysts studying the Pokémon phenomenon, Charizard’s badass appearance and penchant for suplexing things from orbit as one of the primary reasons it’s appealing. Something that is echoed by children quizzed about the Pokémon who often cite the fact it is “cool looking” as the primary reason they’d prefer for their parent or guardian to eat a dick and be replaced by one.

Now you’re probably thinking “well duh, philtrum-fucker, of course children think a big-ass fire-breathing lizard is cool!” to which we respond by saying, well played on taking our advice about insults and also, we’re not finished yet, jeez.

*The next two paragraphs contains what most people would call “some pretty heavy shit” so if you don’t need that sort of thing right now, feel free to skip past it.

It has been noted that Charizard is so synonymous with bravery and power amongst young children that many child psychiatrists have used the Pokémon as a tool for helping abused children come to terms with what happened to them and in some cases, confront their abuser. For example, at the height of the Pokémon card and anime craze in the 90’s, some psychiatrists would ask young children to imagine how they’d greet their abuser if they had the power of Charizard. To which we assume many children responded by inventing the GIF and showing their psychiatrist this.

People working with vulnerable children noted that because many kids either watched the anime or collected Pokémon cards, they were aware of the fact that Charizard was a stone-cold motherfucker who didn’t take shit from anyone, regardless of how many badges they had. As a result, asking children to imagine being Charizard or what they think Charizard would do in a given situation was a useful way to get them to open up when they perhaps didn’t feel confident to do so. It also (hopefully) resulted in at least one piece of shit who abused their kid being set on fire at some point.

For any of the same reasons listed above, mainly that it looks really badass, Charizard is also notably popular with older children, teens and suitably fun adults who see it as being “tough” or “scary”. But, as proof of just how versatile Charizard really is, the Flame Pokémon is also paradoxically popular with fans who prefer “cute” Pokémon. Which probably explains why Charizard toys range from ultra fuzzy plushes with in-built hug technology.

To reiterate what we said at the start of this article, while we’re not saying that Charizard is the best Pokémon, we are saying that it’s the only we know of that is popular with all age groups, genders and has been directly credited by experts as helping abused children deal with trauma. Suck on that, Blastoise.

For more Pokémon facts, why not read about the hilarious and adorable thing fans did after the show was temporarily pulled from the air after giving a bunch of kids seizures. Or read about why Brock was removed and subsequently put back into the anime.