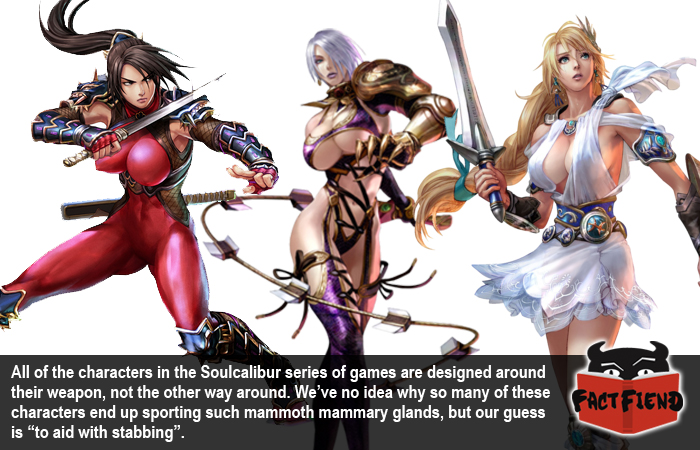 As mentioned above, the focus of Soulcalibur is weapon-based combat and each character on the roster fights with wildly different and unique weapon. For example on character fight using a sword the size of his own torso while another fights with a stick and a collection of prayers uttered before the start of each round.

One thing that critics have always praised the series for is how diverse these characters usually are, the guy featured above for example is the literal embodiment of evil within the game and he will happily fight alongside a mental patient with a knife covered hula hoop and Master Yoda.

So how do they come up with all these weird-ass characters you ask? Well, the short answer is, they don’t, they come up with their weapon and fit the character around it. Yes, as weird as it may sound, literally the first thing the creators of Soulcalibur do when they’re coming up with a new character is agree on the weapon they’re going to use to slap another character to death with.

For example, by far the game’s most iconic character is Ivy Valentine, a woman who could probably cosplay as a set of drawers.

Though the design of her weapon, a snake-like sword you could stab an opponent in the groin with from across the screen, was agreed upon pretty much from day one. Ivy’s design wasn’t, hell, one of the earliest designs for the characters was that or a tiny little girl, which although hilariously awesome, makes us kind of uncomfortable considering the generous proportions Ivy actually sports in-game.

Now we think about it, it’s kind of disappointing that the game isn’t just full of giant sentient weapons kicking 10 pints of piss out of each other. That’d be awesome.