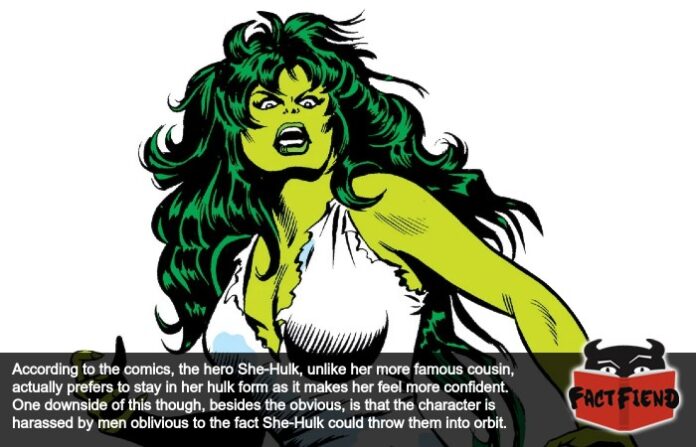 in the comics she hails from She-Hulk is a 7 foot tall bulletproof lawyer with green skin who’s strong enough to headbutt her way through a mountainside. Something you’d think would make people, if not respect her, fear her enough to not, say, try and touch her ass when she’s hurling skrulls into low orbit. According to the character though, that’s not exactly the case.

You see, for virtually her entire comic history She-Hulk has been portrayed as a phlegmatic and formidable woman who, in stark contrast to her cousin The Hulk, openly embraces her jade-tinted alter ego to the point she goes to her day job as a lawyer in her hulk form. Which in addition to being hilarious probably helps She-Hulk convince juries to side with her given she’s on the news every other week saving the entire earth from aliens or some shit. 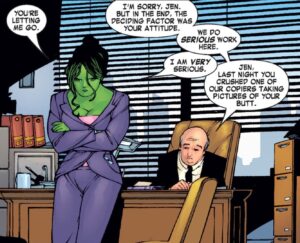 Moving on, it’s revealed in several comics that She-Hulk actually prefers walking around as a giant green woman, despite the obvious handicaps the towering form has, because it makes her feel confident. A confidence that is constantly being chipped away at by weird men who inexplicably think it’s a good idea to creepily hit on and harass a woman who could kick their dick hard enough to turn their balls into meteorites.

Specifically, according to the character, she is endlessly harassed by men, villains and even other heroes all the time even when she’s doing her job. A fact that’s both depressing and arguably makes She-Hulk one of the most relatable women in comics. For example, in one early She-Hulk comic she teams up with Hercules who you’d think given his status as the literal god of strength in his respective pantheon would respect She-Hulk’s combat prowess and prodigious physical capabilities. Instead he acts like a shithead the entire time and then slaps She-Hulk on the arsehole. 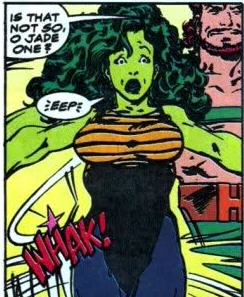 For the curious, She-Hulk’s response to this is to punch Hercules in the face which sends him careening through a brick wall at half the speed of sound. 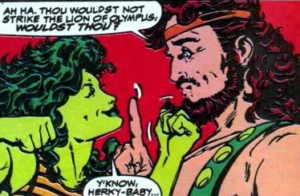 A few comic years later She-Hulk further emasculates the demi-god by leaving him stranded naked in a parking lot after fucking him. 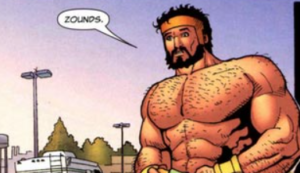 Anyway, in later comics still She-Hulk herself notes that she frequently argued with her cousin about their differing forms with She-Hulk being particularly annoyed at the suggestion it’s easier to look like a buff woman dipped in green paint than a walking earthquake with fists the size of engine blocks. With She-Hulk noting that the Hulk never has to worry about people trying to take a picture of his ass when he’s rampaging through New York or his own teammates sexually harassing him. Something she has to deal with despite everyone knowing she could just as easily fuck them up.

Because of this She-Hulk explains in one comic that she’s kind of glad she transformed into a more brutish, hulk-like form after a bunch of comic shenanigans because it means people don’t harass her anymore. A line that we’re guessing has caused the eyes of every woman reading to roll their eyes so hard they can see the inside of their own skull and was of course, written by a man.

Which is actually kind of fitting for She-Hulk because, for anyone unaware, she’s one of a handful of Marvel characters who knows that she’s in a comic book meaning she’s being mansplained to on literally every conceivable level and still has to smile politely about it to avoid upsetting a man who thinks he knows better.