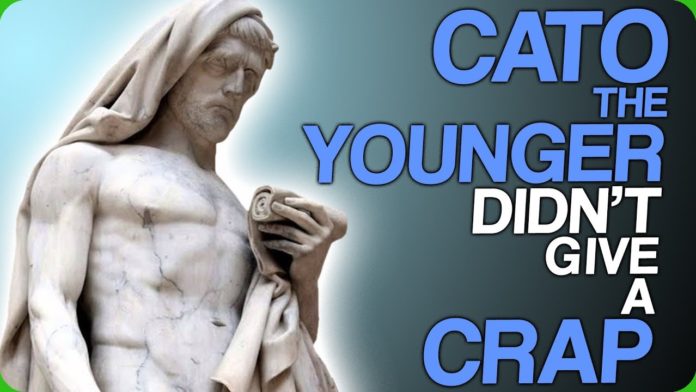 Marcus Porcius Cato Uticensis, better known by his Wu-Tang generator name, Cato the Younger, was a Roman statesmen famed throughout the land for his stubbornness and seemingly limitless supply of non-existent fucks to give. From pretty much the moment he was born Cato was surrounded by people who tried and failed to test his legendary ability to resist temptation. Sort of like those asshole tourists who do stupid dances in front of those guards outside Buckingham Palace, only without the big hat.

As noted in the image above, even at the tender age of 5, Cato absolutely refused to take shit from anyone, even when he was being held out of a fucking window by his ankles by an angry military commander Cato’s only response was to give the guy a dirty “fuck you” look and cross his arms like a Japanese mob boss, while being held upside down.

This stubborn streak continued well into Cato’s adulthood and it’s noted that he refused to ever wear shoes, a cloak or underwear regardless of how cold it was to acclimatise himself to the elements because he didn’t like changing his outfit or spending money on new clothes.  To be clear, in case you’re thinking that Cato couldn’t afford new clothes or something, thanks to a fairly sizeable inheritance in his youth Cato was the equivalent of a millionaire. However, he was a deep believer in the philosophy of Stoicism which stressed a meagre, Spartan existence and as such, he actively chose not to buy new clothes even though he could have easily afforded to do so. The fact that not buying new clothes or investing in winter clothes or underwear meant that Cato was constantly walking around with his dong flopping around is just a hilarious by-product of his dedication to living a simple life.

Speaking of flopping dongs, Cato would often strip off completely naked and sprint until he passed out in the street whenever it rained and could often be seen walking around naked in the snow without any apparent discomfort, presumably while sporting a huge erection that he used to write insulting messages to the gods in the snow.

Despite being a total weirdo, Cato was incredibly popular with the public when he became a statesmen because, well to put it simply, he was fucking impossible to bribe or coerce. In a time when politicians and statesmen were corrupt as shit, Cato stood out as a shining paragon of morality who just so happened to have his dick hanging out most of the time. Cato flat out refused to accept bribes, having anyone who tried to do so arrested and even refused to bad-mouth his opponents in political speeches, believing that doing so wouldn’t be nice.

As an example of how bulletproof Cato’s reputation was. During a trip to Cyprus he collected about 6000 pieces of silver in taxes but lost all of the detailed records he’d kept proving where it’d come from on his way back to Rome. When Cato arrived back in Rome, he explained that he’d lost the records, but assured the Senate that he’d collected the right amount and absolutely hadn’t taken any for himself. And that was it. Cato’s word that he’d not taken any money or fudged the numbers were all the Senate needed to clear him of any wrong doing, he was just that much of a baller.

As you’d expect, even in death Cato was a stubborn asshole and after a civil war erupted, during the course of which Cato was branded a traitor to the empire by Julius Caesar, Cato committed suicide as soon as he learned Caesar had gained power because he refused to live in a world where he was in charge. But here’s the best part, Cato tried to commit suicide with a sword, but only succeeded in tearing open his own abdomen.When a physician ran into his room and tried to stitch up the wound, Cato tore out his own guts and threw them across the room and killed himself instantly. Because that is how you make a statement.