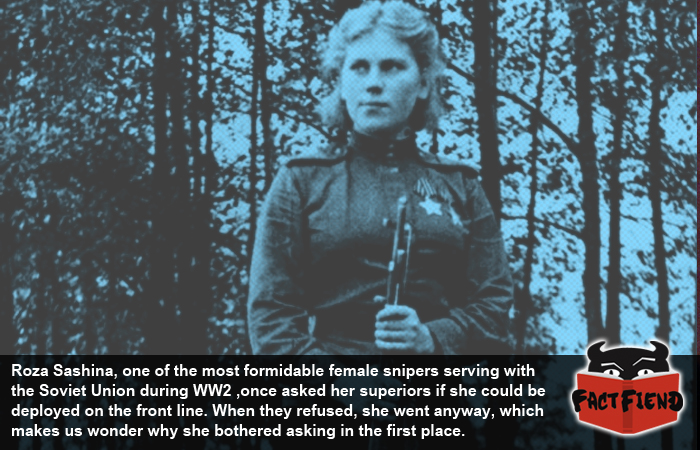 During WW2, the ever progressive Soviet Union made the decision to begin deploying female sharpshooters across the country out of the belief women were more cunning than men and hence would be better at shooting people in the dick from 800 yards away. One of these snipers was Roza Shanina who pretty much spent the entire war ignoring every order she was ever given if it involved anything other than shooting Nazis.

Shanina is said to have applied to join the Red Army soon after she learned that one of her brothers had been killed in Leningrad in 1941, but was rebuffed each and every time she applied, even after the Red Army began to draft women between the ages of 16 and 45 in 1942. After a year of repeatedly applying to join the military, Shanina took matters into her own hands and began learning to shoot on her own, all the while continuing to send letters to military officials asking if they’d changed their mind about letting her shoot people for the Motherland. However, it wasn’t until 1943, two years after Shanina had initially applied for military service, that she was finally allowed to enrol in the Central Female Sniper Academy.

Shanina quickly established herself as a crackshot at the academy, becoming particularly adept at hitting multiple moving targets in a row without missing a shot, presumably by imagining each target was Hitler’s face. Shanina’s scores were so high that after she completed basic sniper training, she was offered a job as an instructor at the Academy, which would have allowed her to serve he country without exposing herself to danger while also wearing an incredibly fetching hat. Shanina bluntly refused the offer due to a combination of engorged balls and an unwillingness to ignore the “call of duty”. Which we’re guessing at least 20% of people reading this just learned is a real thing and not just a video game.

During her time fighting, Shanina was personally credited with 59 enemy kills, a handful of which she accomplished a trench shovel when she and 11 other female snipers were ambushed by 50 Nazis and they ran out of ammo. To quote Shanina’s own diary about the ambush “Some fell from our well-aimed bullets, some we finished with our bayonets, grenades, shovels, and some we took prisoners, having restrained their arms.”

In June of 1944, the Red Army began to withdraw its female snipers, an order many of them ignored so that they could keep shooting Nazis in the dick. Shanina went one step further and sent a letter to her commanders asking to be sent to the frontlines, a request that was denied because the Red Army had a policy of sparing its snipers from frontline combat, believing  they were more effective in better defended, less explodey locations. After careful consideration, Shanina decided that this policy was bullshit and went to the front anyway.

Shanina’s superiors debated punishing her for her actions, but were forced to let her off when it became apparent that she was going to do whatever the fuck she wanted anyway and it was decided it was probably best to just let her do her own thing and continue introducing bullets to Nazi brain stems. Shanina is also noted to have personally sent letters to Joseph Stalin asking to serve with a battalion in the 5th Red Banner Army, but never heard back from the diminutive dictator.

Even after being shot in the shoulder, Shanina refused to be withdrawn from combat and after having the gaping hole in her arm patched up, immediately requested to be sent back to the frontlines, you know, that place she’d specifically being told not to go and had also been shot. Her commanders relented and finally gave her permission to officially fight on the front. Shanina responded by killing 26 Nazis during the East Prussian Offensive, earning her the unimaginative but still kind of badass nickname, “the unseen terror of East Prussia“.

Shanina would later die in combat after being hit with an artillery round while protecting a wounded commanding officer. Despite having her internal organs exploded out of her body, Shanina survived long enough to tell the nurse tending to her wounds that she felt bad about doing so little for her country. Yes you read that correctly, after beating a handful of Nazis to death with a shovel, killing 50 more and saving a fellow soldier from a bomb, Shanina’s final regret was that she wasn’t able to do more. Damn, maybe they should have let her join the army when she first asked, she probably would have ended the war overnight by personally sneaking into Berlin and headbutting Hitler to death.

If you still want to read about badass female sharpshooters, why not read about how Annie Oakley once offered to personally train an elite team of snipers for the American Government.