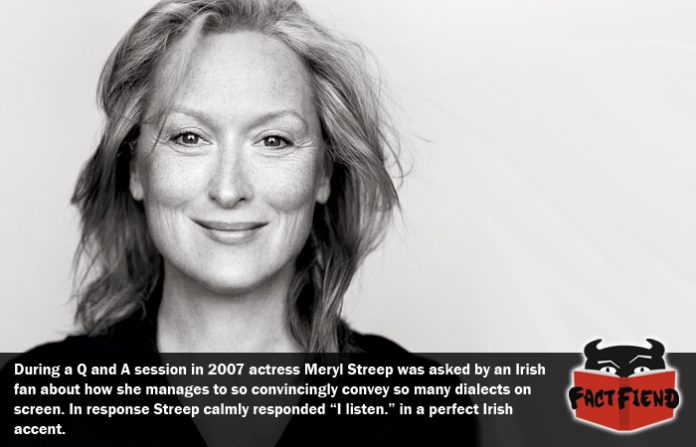 Meryl Streep doesn’t need us to tell anyone that she’s a fantastic actor, the bag of awards in her house and creative dick-slap she gives every other actor when she owns whatever she role she’s playing do that for her. We would like to discuss one very particular aspect of her acting style though, mainly her unusual ability to perfectly emulate accents.

Now you’d think learning accents would be one of the first thing actors do because it seems pretty fucking essential to an actors repertoire to be able to pretend to be people who aren’t them. Hell, there’s an entire joke in Friends about the reason Joey is such a shitty actor is because every accent he does sounds Jamaican. 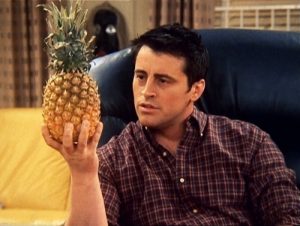 For some reason though, Hollywood doesn’t seem to give that much of a shit about accents, at least not for big stars. For example, there’s a movie set during Nazi-era Germany called Valkyrie in which every single principle actor speaks with their native accent. When asked to defend this decision, director Bryan Singer claimed that if everyone tried to effect a German accent the film would seem “false” which is Hollywood double speak for nobody starring could effect a convincing enough accent without it sounding shitty, laughably racist or both.

There are of course countless other examples from Halle Berry’s African accent in the first X-Men movie that was so embarrassing it was dropped in every subsequent film to literally every movie Sean Bean has ever been in. In regards to Bean, he’s noted as being so set in his ways that when they cast him in Game of Thrones every actor playing one of his sons had to learn to copy his accent because he refused to change how he spoke. While this doesn’t necessarily make any of these people bad actors, it does paint them as limited ones, which is where Meryl Streep comes swaggering the fuck in. 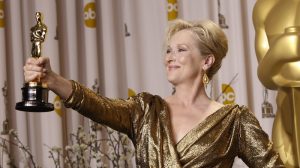 To put it simply, for pretty much every single role Meryl Streep has ever had that has required her to effect any kind of accent, she has been so convincing native speakers from the region of the character she’s portraying have commended her accuracy.

We don’t just mean Streep can put on a convincing English accent, we mean that when she portrayed Margeret Thatcher, she spent weeks learning how to emulate exactly how the Iron Lady spoke before and after she received elocution lessons, perfecting both her mannerisms and way of speaking. Not impressive enough? For Sophie’s Choice, Streep delivered lines in three languages, English, Polish and German, all with a Polish accent. Just for a second think about how the number of steps involved in doing that. First Streep had to learn how to speak with a Polish accent as well as speak Polish itself. After that she then learned how to speak German from the perspective of a person who originally spoke Polish so all her accents would seem genuine. Then she had memorise all her lines in three languages while simultaneously remember to speak English like it was her third language, Polish like it was her first and German like it was her second. It’s no wonder she won a fucking Oscar for that role.

There are numerous other example of Streep effecting similarly flawless accents including Italian, Dutch, Irish and Australian, the latter of which she did so well, she won an actual award from the Australian Film Institute for being the only actor to do that convincingly in years.

What makes Streep so amazing though is that she flatly denies being a great actor, insisting that all she does is “listen” really hard, something she’s proven in multiple interviews by answering questions asked of her in the asker’s own accent, seconds after hearing it for the first time.

Now we’re not saying that Meryl Streep is an alien lifeform secretly doing all it can to learn about humanity, we’re just saying that if such a lifeform existed, she could kick it to death and take its place and the aliens who sent it would never know.