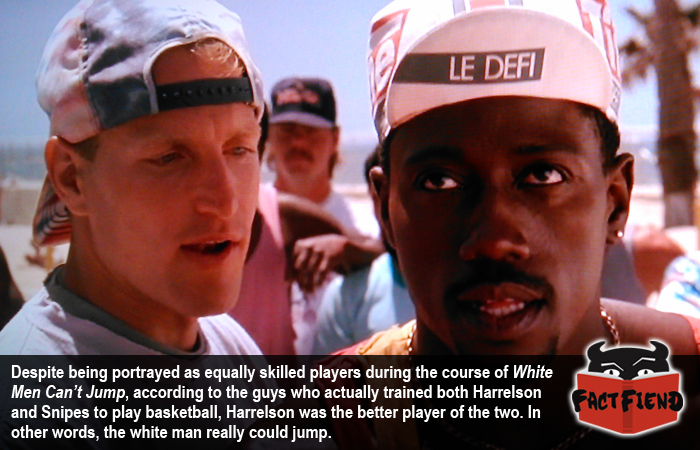 White Guys Can’t Jump is possibly one of the most 90’s movies ever made because it features a pre tax evasion Wesley Snipes, backwards baseball caps and Jeopardy. It also apparently features basketball at some point but we’ve never noticed it because we were too busy looking at Wesley Snipe’s hat.

Now the movie called for both Wesley Snipes and his co-star Woody Harrelson to actually learn how to play basketball and both men received coaching from bona fide basketball giants, including literal giant, Bob Lanier. A man so tall his father is listed as “a ladder” on his birth certificate.

Now by the start of filming it’s reported that both Harrelson and Snipes were good enough at pulling off sick dunks that their coaches said that they could could have easily walked straight onto a Division III team and slapped everybody there with their dicks. According to coach Lanier, an NBA Hall of Famer, both men could also, for the most part, hold their own against him when he didn’t particularly feel like dunking on a motherfucker. According to Harrelson, during production he got a little cocky and tried to challenge Lanier to a game of one-on-one, Lanier responded by sinking 3 pointer after 3 pointer until Harrelson’s ego shrivelled to the size of a raisin with erectile dysfunction.

However, while it’s certainly true that neither man was capable of seriously standing toe to toe with a real NBA player, they were competent enough to look like they belonged in a game of street basketball.

The thing is, though the movie suggested that Snipes and Harrelson’s characters are equally skilled, according to Lanier and well, everybody else on set, Harrelson was by far the better player. This is likely because Harrelson had already played basketball at college level and remembered how to hold the ball, which we’re presuming is something they spend like 8 weeks teaching you.

In fact, Woody Harrelson was so much better than Snipes that he had to town down his abilities on-screen so that he and Snipes’ characters looked to be about equal. In other words, in a film that revolves around the entire concept that white guys suck at basketball, the white guy was the best basketball player.

If you’re still hungry for stupid movie trivia, why not find out why Alan Rickman wore the same outfit in all 8 Harry Potter movies.