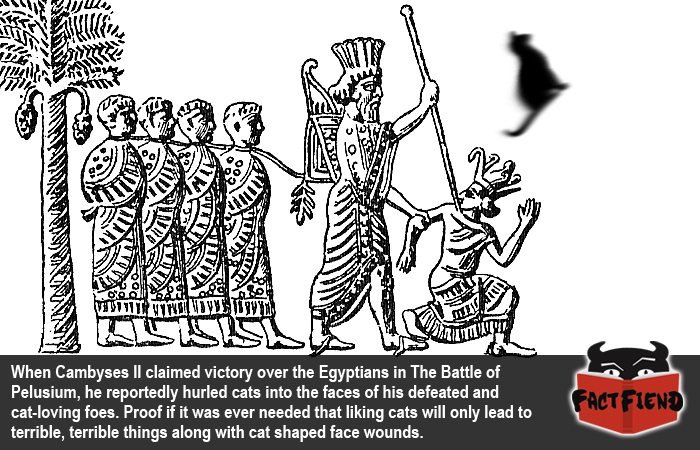 This article was recently turned into a video on that YouTube channel we keep mentioning. You can check it out below along with a bonus story about the Sims.

If you’d prefer to just read the original article, that is also found below.

The ancient Egyptians loved themselves some cats, so much so that just hurting one could result in you being stabbed to death by angry guards covered in cat fur. Using this knowledge, Cambyses II wiped the floor with the Egyptians in battle by literally throwing cats at them until they surrendered.

You see King Cambyses knew that in ancient Egypt people freaking loved cats, if a building burnt down, people would save the cats inside before putting out the fire. If someone killed a cat, they’d be immediately put to death, if a pet cat died, its owners would shave off their eyebrows just so foreigners would know how stupid they were by looking at them. The love and respect of cats was such that the only being they believed to be superior to them was the fucking Pharaoh himself and the Egyptian army would often be called upon to track down smugglers who took cats out of the country so that they could be returned to Egypt, where they belonged.

If ancient Egyptian history isn’t really your thing, the basic reasoning for ancient Egyptians having such a hard on for cats is that one of their most powerful and vengeful gods, Bastet, often took the form of a cat. As a result, all cats were considered divine in some way.

Now the story you’ve likely heard in history class or perhaps elsewhere online is that Cambyses II, prior to The Battle of Pelusium, adorned his soldiers shields with the image of a kitty cat, banking on the fact that the Egyptians would be too scared to harm the image of their god. Doubling down on his efforts, Cambyses II also set hundreds of cats loose onto the battlefield, which Egyptian soldiers instinctively dove to the ground to protect whereupon they were either stabbed or trampled to death while the cats continued giving as few a shits about the who situation as physically possible.

Unbelievably Cambyses’ ridiculous cat-gambit totally worked and the Egyptians were so terrified of hitting one of the cats or even striking an image of one, that they either surrendered on the spot or were cut down while they ineffectually flailed at the sky cursing their cat God’s name in an ancient forgotten tongue.

The part you’re likely not familiar with however is that after his victory, Cambyses II suddenly decided to be a huge asshole to the Egyptian soldiers his men captured for no other reason than, fuck them worshipping a stupid god. After the battle was over, purely to insult the few Egyptian soldiers who hadn’t been slaughtered in battle, Cambyses II collected hundreds more cats and then spent several hours personally throwing them into the faces of defeated soldiers while openly mocking their devotion to their precious Bastet.

The fact Cambyses II was able to hurl cats dozens of feet through the air into the faces of the people who literally worshipped them without having his eyes immediately clawed out of his skull, should have probably tipped off the Egyptians that their Cat-God wasn’t as vengeful or powerful as they thought.

But alas, their fear of upsetting Bastet was so great that the few surviving Egyptians forced to suffer through the indignation of some asshole throwing cats into their face, didn’t react at all. We really hope those guys ended up in Cat-God heaven because damn do they deserve it.