Few moments in the Batman mythos are treated with as much derision and disdain by fans as that one time in the 1960’s TV show Adam West Batman fends off an angry about-to-explode shark with a can of shark repellent spray. As it turns out though, that scene was actually pretty faithful to the early Batman comics which show that the Dark Knight does indeed carry around a can of shark mace with him at all times. You know, just in case a shark wants to start some shit.

For anyone unfamiliar with what we’re talking about or just wanting us to run them through it one more time, in the 1966 Batman film based on the ever popular TV show of the same name, the Caped Crusader is attacked by a shark filled with explosives during literally the first few minutes of the film. As if that wasn’t ridiculous enough, this all happens while Batman is hanging from the Bat-ladder (it’s really called that) attached to his Batcopter (again, it’s really called that) hanging a dozen feet in the air leading to what we believe is a contender for greatest film screenshot of all time. 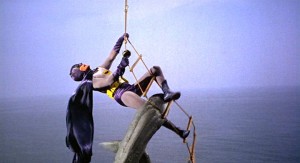 After delivering a few ineffectual bat-punches to the shark’s kidneys and sensitive belly section, Batman grabs his radio and asks Robin to throw him down a can of Shark Repellent Bat-Spray, which he of course stores in his helicopter alongside 3 other “Oceanic Repellent Bat Sprays” designed to fend off the more aggressive and dickish animals to call the ocean their home.

After being sprayed in the face, the shark loosens its kung-fu mouth-grip on Batman’s leg and falls harmlessly into the ocean before exploding into a cloud of cheap sushi and pre-made shark fin soup. For some reason, fans of Batman, or should we say, fans of a the darker and more brooding version of Batman that beats up Superman in that one comic, tend to dislike this scene for making the World’s Greatest Detective look like a bumbling dumbass. Which isn’t really fair considering this scene shows that Adam West’s batman, like his more serious counterparts is prepared for anything up to and including shark attacks, in mid-air.

Another criticism of the scene is that it’s an example of bad writing to show Batman simply escaping from the shark by using a gadget he’s never mentioned or alluded to before, even though it totally was, 8 years earlier in Batman #117. In the comic, Batman and Robin are swimming in the ocean on an alien planet when they’re attacked by a giant purple dragon monster. After dismissing the idea of using his anti-gravity ray, which obviously wouldn’t work underwater, Batman makes a hail mary call and sprays the monster in the face with shark repellent, theorising that if it works on the “killers of the deep on Earth”, it will probably work on another planet if he believes hard enough. This being a comic released before “gritty reboots” were a thing, the gambit pays off and the monster swims away.

Ignoring the fact the comic also establishes that Batman used to have access to an anti-gravity ray and never once used it to float the Joker 800 feet into the air to serve his time at Arkham as a prisoner of the sky, the important thing to take away from this is that there was totally a precedent for Batman having shark repellent in the 1966 Batman film and that all those people who say it was stupid, are ignoring that it was lifted straight from one of the original comics.

Also, because we didn’t get you a Christmas present and because we can, we wanted to end this article by reminding everyone in that same movie, Batman explains how he was saved from being hit by a torpedo in the previous scene by casually remarking that a dolphin inexplicably decided to leap in the way at the last second and detonate itself. 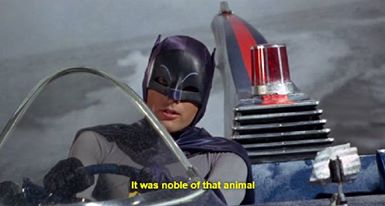 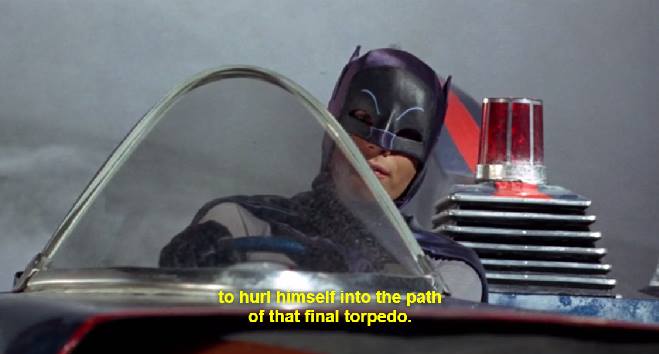 Movies back then just didn’t give a shit did they?