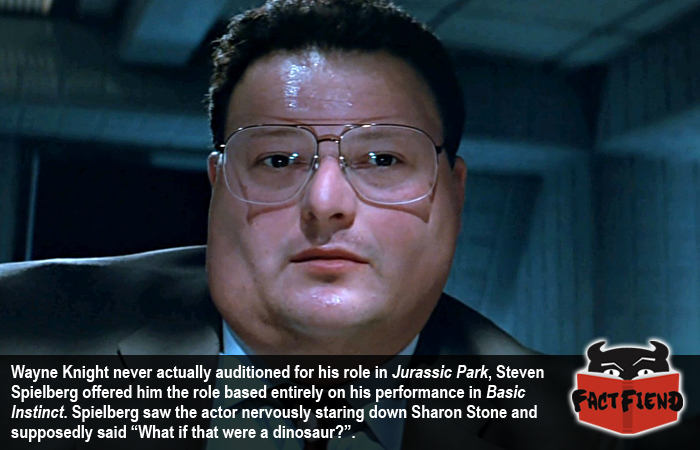 As we’ve mentioned before, the role of Dennis Nedry in Jurassic Park was one that changed significantly in the jump from novel to silver screen. Even still, we don’t think we could imagine anyone but Wayne Knight paying the role, which is weird because he never actually auditioned for the part.

As noted in the image above, Knight was offered the role of Nedry by Spielberg himself after he saw him in Basic Instinct. Though Knight arguably only had a minor role in the movie, he just so happened to appear in one of the most iconic scenes, the one in which Sharon Stone is being interrogated. AKA, the scene that was paused a thousand times.

For the 8 people reading this who still have no idea what the fuck we’re talking about, during the scene in question, Sharon Stone is being interrogated by a group of men (Knight included) when, without warning, she slowly uncrosses and then recrosses her legs, revealing that she is in fact, wearing no underwear.

The scene was hugely controversial and actually resulted in Sharon Stone straight up slapping the director in the face because she didn’t realise how clearly the world was going to be able to see her snatch. However, it was also the single most memorable scene in the entire fucking movie, which was great news for Knight because it ended up being watched by none other than Steven God-Damn Spielberg.

According to a 2013 interview with Knight, Spielberg got in contact with his agent and offered him the role of Nedry based purely on the strength of his performance in that scene. After seeing Knight devolve into a sweaty, nervous mess in the face of Sharon Stone’s lady garden, Spielberg supposedly though to himself “what if that were a dinosaur?“.

Apparently though, Spileberg’s faith in Knight as an actor was only limited to a single movie, because when the news broke that Jurassic Park 4 was going to be a thing, Knight approached the director and asked for a part in the film. When asked how his character could have possibly survived after having his face ripped off by a dinosaur, Knight very matter-of-factly stated, “It was a very big meal and a very small dinosaur“.

However, Spielberg wasn’t too enthused with this idea and turned the actor down. In other words, thanks to Steven Spielberg, we won’t be seeing a hook-handed, eye-patch wearing Wayne Knight stabbing dinosaurs in the face.