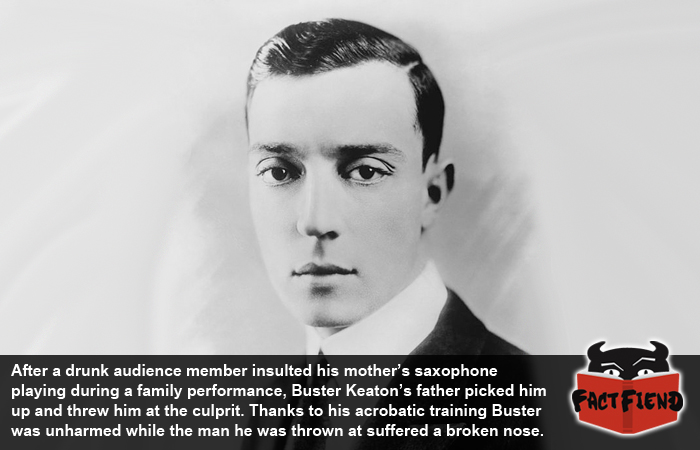 Buster Keaton is mostly known for two things, his stunt work during the silent film era and the fact he almost never smiled or smirked in any of his movies or comedy shorts, earning him the nickname “the great stone face”. Which is arguably better than his earlier nickname of “The human mop”.

Keaton earned this nickname as a child during his time as a vaudeville performer thanks to his uncanny ability to be thrown across the stage without injury. Keaton’s act required him to follow his father around on stage as he performed various menial tasks, aping his actions in a mocking fashion whenever he turned his back. After the crowd was suitably amused, Keaton’s father would the pick him up by the collar and hurl him several feet through the air. If you’re wondering how on Earth Keaton’s father was able to fling a human being through the air like a cheap suitcase through an airport metal detector, it’s because Keaton was only 5 years old when he began performing this routine.

In his later life, Keaton always maintained that although the routine looked like cartoonishly over the top child abuse masquerading as family entertainment, he was never hurt that badly during a single show, even when his father threw him at windows, doors and even members of their own band.

Keaton’s father was so cock-sure of his son’s ability to take a fall without injury that he sometimes used Buster as a make-shift weapon to teach dick heads a lesson. One of the most famous examples of this happened during a show in New York after Keaton’s mother’s saxophone solo was rudely interrupted by a group of assholes in the third row. When the time came for Buster’s routine his father had, had enough and the first thing he did when the pair walked on stage was look to his son and say “tighten up your asshole son“. Buster nodded in agreement and a few seconds later he was flying through the air feet-first towards the loudest member of the group of people riling up the crowd ready to deliver an all-mighty kick-slap to the face.

The father-son dropkick hit the unnamed dipshit with so much force that it actually broke his nose, Buster on the other hand escaped the collision unscathed thanks to years of acrobatic training and the adrenaline boost that naturally comes with kicking a fully grown man in the face from 10 feet away.

A week later when Buster’s father went to collect his wages, he was verbally reprimanded for using his son as a club to beat customers with and was billed the price of a new hat to replace one Buster broke when he landed. A price we’re guessing Buster’s father was totally okay with paying to ensure nobody ever talked during one of his shows again.