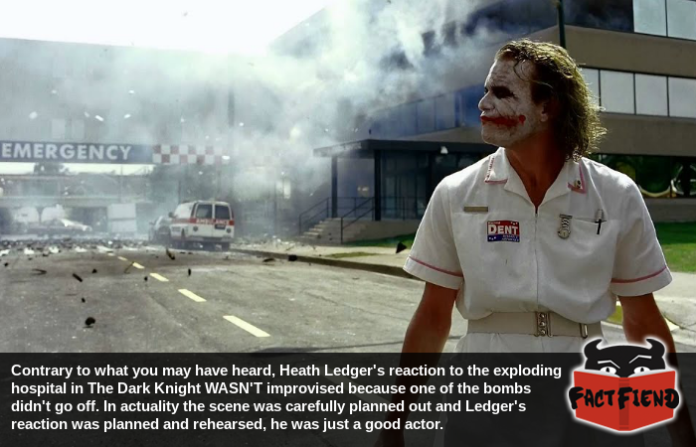 There’s an oft repeated internet factoid that during the filming of The Dark Knight actor Heath Ledger was forced to improvise a reaction due to a malfunctioning pyrotechnic during the film’s iconic exploding hospital scene. As it turns the reaction wasn’t improvised but a deliberate, rehearsed piece of acting to keep Ledger safe.

First though, if for some inexplicable reason you haven’t seen The Dark Knight there’s a scene about mid-way through the movie where the Joker, played by Heath Ledger, detonates an entire fucking hospital for shits and giggles while dressed a sexy nurse-clown. 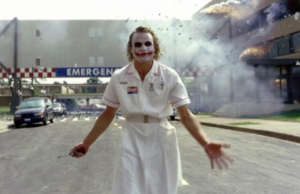 Towards the end of the scene something seemingly goes wrong with the detonation, prompting the Clown Prince of Crime to stand around like a lemon fiddling with the detonator trying to figure out what they hell happened. 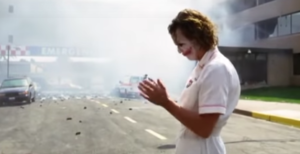 After a few agonising seconds of nothing happening the explosion continues and the Joker beats a hasty retreat to a waiting school bus.

Now according to countless websites, YouTube videos and trivia pages online, the part where the hospital inexplicably stops exploding was a genuine mistake and Ledger’s perplexed, in-character reaction was improvised. The thing is, it wasn’t, like at all.

You see, the hospital exploding in the background as Ledger struts towards camera was a real building that was actually filled to the brim with explosives set up by a pyrotechnics team. The story goes that the building was set to be destroyed anyway and director Christopher Nolan managed to convince the owners to let him do it instead, in return for being able to film the outcome. 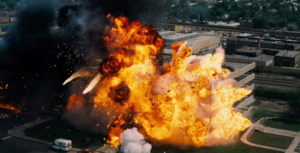 The problem with blowing up an entire building though is that it’s, you know, dangerous. Which was kind of an issue when the scene called for Heath Ledger to walk straight out of the building as it was exploding in one continuous shot. A solution then, was needed and it came in the form of a purposeful delay in the pyrotechnics. The idea being that during the delay Ledger could make it a safe distance away from the building and play it off like a mistake. Which he did, so convincingly in fact that tens of thousands of people assumed that delay was a real mistake and that Ledger improvised his reaction to it.

In reality the actor was just, well, a good actor and was able to ignore a giant exploding building thanks to having endlessly rehearsed the scene with Nolan since you only really get one chance to blow up an entire fucking building.