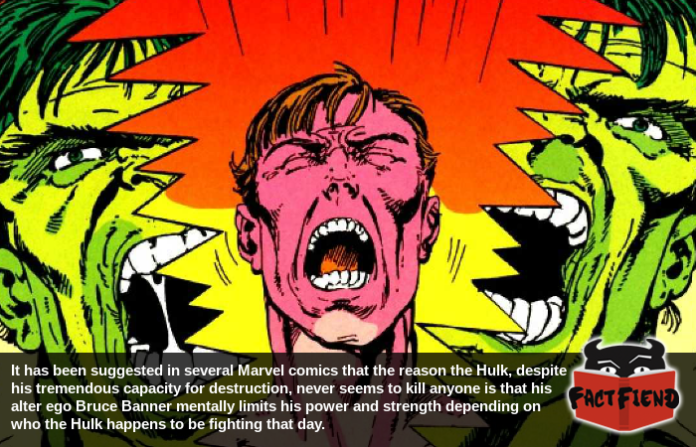 The Hulk is a Marvel comic character defined by his tumultuous and occasionally violent relationship with his alter ego, Bruce Banner. Curiously, while the Hulk often boasts about the fact he is “the strongest there is”, the comics have established that Banner actually calls more of the shots than you’d think.

First though, we should discuss exactly how powerful the Hulk is according to the comics since it’s not exactly an easy question answer. Part of the reason why is that the Hulk’s power in most of his incarnations is directly proportional to how angry he is at that exact moment. In fact, the Hulk’s capacity for strength is described as being effectively infinite as he always has the capacity to get just that little bit angrier. 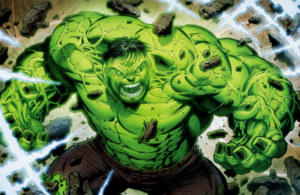 Because of this several comics have noted that the Hulk is potentially the strongest mortal being in the Marvel universe in terms of raw physical might with there being almost nothing in his universe capable of hurting him, let alone overpower him in a fistfight. Some of the more especially impressive feats of strength attributed to the Hulk include punching someone so hard a nearby planet exploded, squat-lifting the weight of an entire star and bending the Silver Surfer’s supposedly indestructible party surfboard, to hit a monster with it.

The thing is, in addition to squaring off against beings who can explode planets with a single, hyper-sonic slap from his weighty green dick, the Hulk often fights opponents who are decidedly less powerful. A fact that begs the question of how the Hulk avoids straight up fucking killing anyone less durable than a literal god when he punches them. You know, like that time he straight up fucking punched a regular old deer in the face without sending it into low orbit. 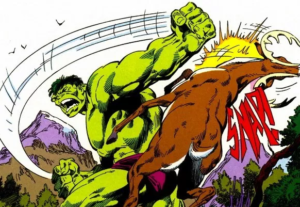 Well for many years the answer to this question was to just not try to think about it too hard and it was a running joke that the Hulk, and indeed many Marvel characters were as strong as the writers needed them to be at the time. However, more recently it has been established that Bruce Banner is likely the reason everyone the Hulk faces off with isn’t a pink smear.

You see, in the Incredible Hulk Vol 2 #110 a character called Amadeus Cho is curious about this exact thing and decides to take a look at data pertaining to previous battles the Hulk has taken part in. To Cho’s surprise he realises that the Hulk barely, if ever, kills his opponents in battle despite being easily capable of doing so, causing him to posit that Bruce Banner is somehow capable of placing mental limiters on the Hulk’s strength so that he won’t kill his opponent. Only really, really hurt them. 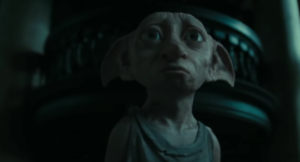 Supporting this theory is the fact that in situations where Bruce Banner’s link to the Hulk is somehow severed, the Hulk becomes many times stronger and is noticeably less bothered about the collateral damage he causes. As an idea how few fucks a Banner-less Hulk gives you only need to consider that on rare occasions where Banner allows the Hulk to go all out or Hulk becomes angry enough to completely free himself of his influence the simple act of taking a single step is enough to threaten an entire continent with the amount of force the Hulk puts into it. In essence, he becomes a literal walking earthquake with the potential to end all life on Earth by sitting down too hard.

A fact that makes in kind of hilarious that the only man capable of stopping the Hulk do this, is the one guy the Hulk himself constantly calls puny and weak.