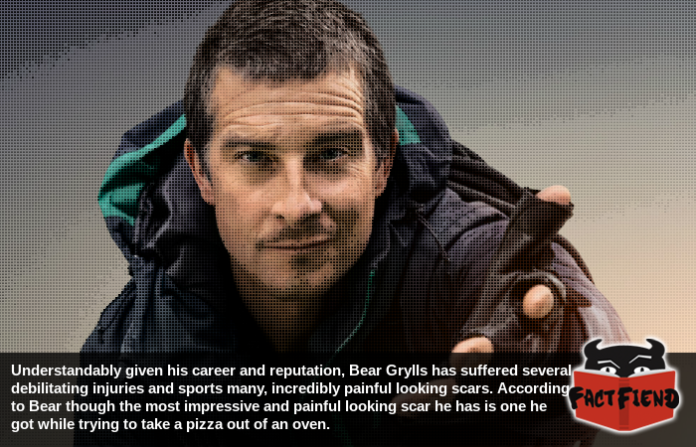 Bear Grylls is a man whose life reads like John McClane’s obituary both in terms of the crazy shit he’s done and how utterly ridiculous it all sounds. For example, consider the time he once nearly seared his nipple off with a pizza.

Now if your knowledge of Bear Grylls is simply limited to the various TV shows he’s appeared on you may not have realised that he’s actually a military veteran who served with distinction with the motherfucking SAS. You know, once of the most hardened, feared and respected military units on the planet as well as the best playable side in Call of Duty. 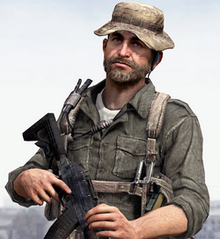 As an idea of how much of a badass this required Grylls to be, it’s worth noting that the only reason he’s not still serving with the SAS is because he broke his spine during parachute training and was discharged. Meaning yes, all of the crazy bullshit you’ve seen him do on TV was done after he walked off having his spine turned to bone confetti because he fell out of a plane!

Speaking of his TV shows, while admittedly Grylls has been accused of making extensive use of television magic and editing trickery for some of them, people who’ve worked on them have admitted that, that’s mostly for his safety and that he’s fully capable of doing everything shown. Which isn’t that surprising given his previous job was teaching survival skills to the SAS.

For example, during the filming of one episode Grylls fell into a frozen lake, a death sentence for the unprepared, and casually climbed back out like nothing had happened. In fact, the whole ordeal was so routine that the cameramen filming the episode took a break while was hauling himself out of the frozen water and didn’t bother helping him warm back up. Mostly because Grylls has already stripped off bollock-naked and started rolling around in the snow to dry off. As is his way. 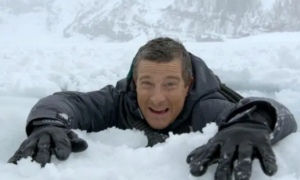 As you might imagine then, all of this roaming around the wild has left Grylls with many a gnarly star. The most gnarly, at least according to him, being one he got from a pizza. Specifically, according to Bear he has an incredibly painful looking scar right across his nipple which many assume is from one of his many adventures or perhaps a crocodile. However, Grylls has admitted that he got the scar trying to take a pizza out of the oven while wearing swimming shorts.

You see, Grylls was apparently so excited about the prospect of piping hot short-pizza that he lost his grip, sending the searing hot disk of cheese directly towards his nipple area, branding him for life in perhaps the stupidest manner possible. Then again, as they often say, the worst scars are the ones caused by the things we love the most so maybe it makes sense.