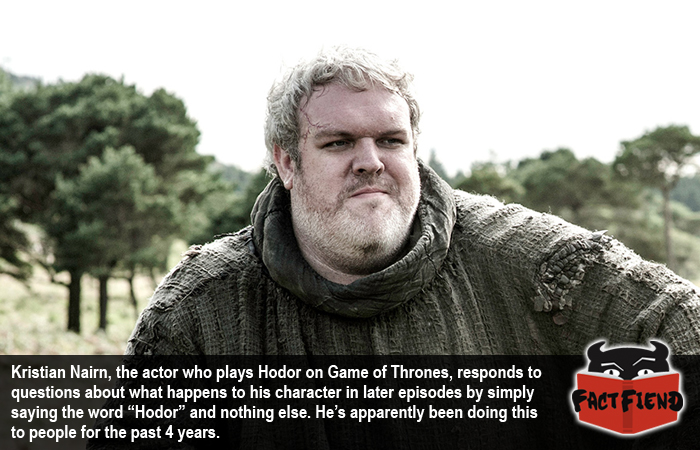 This article can now be found as a video, complete with shitty green-screen effects.

If you prefer to read facts rather than absorb them with your face eyes, the original article can be found below.

The actors from the Game of Thrones series probably have to deal with fans asking them questions about what happens to their character in later episodes every single day. Luckily for Kristian Nairn, his character only ever says one word. Hodor.

If you’ve never seen an episode of Game of Thrones or read the accompanying book series, the character of Hodor is a mentally challenged, 7 foot tall giant who is only capable of saying the word “Hodor”.  In short, he’s pretty rad.

Though that description makes it sound like Nairn has the easiest acting gig in history, he apparently has around 70 different ways of uttering the word “Hodor” to express a range of emotions and due to his character’s inability to speak properly, he has to be very mindful of his body language and facial expressions, using the subtlety of movement to add a masterful nuance to his character. 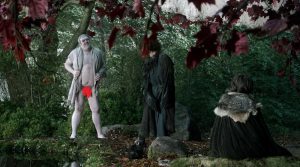 Now it’s often said that words can’t hurt you if you don’t let them, unless those words are Game of Thrones spoilers, in which case someone should punch you in the fucking face. And Game of Thrones actors are very mindful of that, as such, a lot of them actively go out of their way to not spoil the series for fans, even if they ask. Although to be fair, according to a lot of the actors from the show, that’s mostly because they’re terrified of Charles Dance, who will absolutely refuse to discuss spoilers, or the book with anyone.

Kristian Nairn on the other hand is a little more lax, and he will happily discuss his character and his fate in episodes that haven’t even aired yet with fans, friends and family. That said, the only thing he’ll actually tell people is “Hodor”. Making him the greatest troll on the entire show, which isn’t bad for a guy with a one word vocabulary.