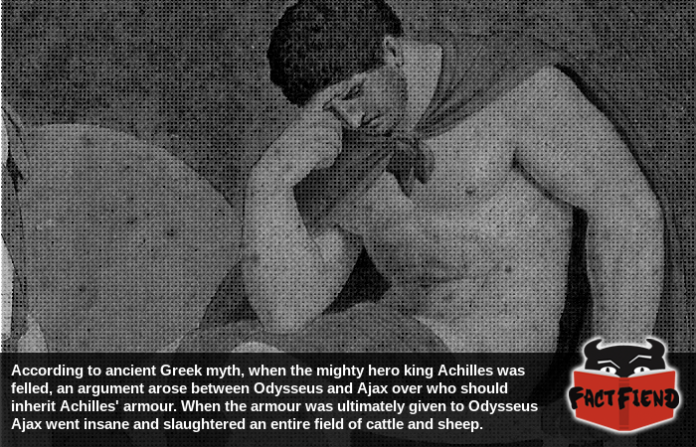 Ancient Greek myth is replete with stories of heroic, refrigerator-sized men whose feats on the battlefield were quite literally, the stuff of legend. Arguably one of the most famous was Ajax the Greater, a man who fought alongside the ancient hero king Achilles. A figure who inadvertently caused Ajax to die fist-fighting a herd of sheep.

Firstly, yes, we know this website is called Fact Fiend and we’re literally discussing myth here so we should clarify that while this story is a work of fiction, it is a fact that the ancient Greeks believed this story to be true.

Anyway, this particularly amusing footnote from Greek Mythology is said to have taken place during the climax of the Trojan War. Specifically, immediately after the death of the Achilles. You know, the guy who was said to be wholly invincible in open combat who died from a single arrow wound to the ankle who was later given the greatest honour modern cinema can bestow upon a figure, being played by a guy who fucked Angelina Jolie. 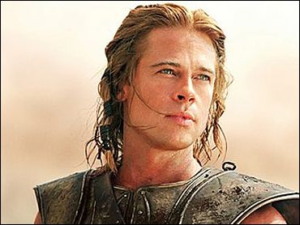 Moving swiftly on, the story goes that following the death of Achilles, Ajax and another solider called Odysseus retrieved his body whilst simultaneously holding off the entire Trojan army. If you’re wondering how two men could possibly do that, remember that this is a myth we’re talking about and also that, according to legend, Ajax was 7 feet tall and trained in warfare by a horse-man.

The story continues that after Achilles was buried a fierce argument erupted between the heroes over who deserved to inherit Achilles’ armour. Which, because this is a myth, was of course magical as well as stylish as all balls. Not that this mattered to Ajax because it was quickly decided that Odysseus should get the armour, not him.

This, somewhat understandably, kind of annoyed Ajax and he immediately began plotting to murder the fuck out of Odysseus the instant it was decided he should keep the armour with Ajax’s plan to accomplish this reportedly being to simply attack the entire Greek army singlehandedly and take the armour for himself.

Ajax’s plan was ultimately foiled though by the goddess Athena who clouded the gigantic warriors mind with god-magic and made him think that a nearby herd of sheep was the Greek army. A flock of sheep Ajax went right ahead and tore apart with his bare hands in a fit of rage. Something Ajax felt so guilty about when he eventually came to his senses that he immediately committed suicide. Meaning one of the greatest heroes of Greek myth died, because of sheep.