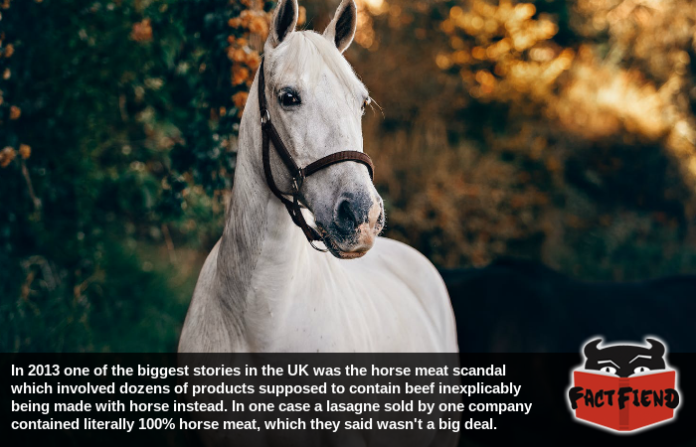 In 2013 Europe was rocked by a massive scandal when it was discovered that countless products sold as a beef across the continent actually contained a bunch of horse instead. In the midst of this scandal one company was even found to have sold a lasagne that was quite literally, 100% horse meat, something they heroically tried to defend. Because when life gives you horse, you make lasagne, apparently.

First though there are likely people reading this right now who are probably wondering how in the fuck horse meat got labeled as beef, the short version of the story is that horse meat from a factory in Romania was bought and sold over and over again by a bunch of different meat wholesalers. One or some of whom, at one point in this meaty daisy chain, labelled the meat incorrectly, presumably to avoid having to dispose of it. The end result was a veritable smorgasbord of “beef” products being made and released that actually contained less beef than a Big Mac.

As an aside, whilst a bunch of products being crammed to the brim with horse understandably grabbed most of the headlines, other products labelled beef and in some cases, fucking chicken, were actually pork. Which was a big deal for people who abstain from the meat for religious regions and also, really, really speaks to the quality of the products companies are allowed to sell if they’re so processed people can’t tell the difference between beef, pork, chicken and horse.

Anyway, the impact of this scandal cannot be understated with perhaps the best example of how pissed customers were being the supermarket chain Tesco which lost £300 million worth of market value in the space of a few weeks because a small smattering of their products were found to be laden with horse.

This all said one company took a good hard look at all of the negative press, sustained coverage of companies losing millions and the endless, sustained anger from the public and decided that it wasn’t a big deal. Findus. We say this because at the height of the scandal a beef lasagne produced by the company was found to be, quite literally, all horse.

Something the British public were understandably outraged about with the lasagne quickly becoming symbolic of the entire scandal. Amazingly though, despite this being the single biggest story in the country at the time, Findus released a statement inexplicably defending the product noting, in part, “We do not believe this to be a food safety issue.”

Which yeah, was technically true, but wasn’t exactly the reason people were annoyed about it and also was kind of a flaccid sentiment when it occurred alongside Findus recalling every single one of the lasagnes in the country. Because nothing screams “this product is safe” like desperately removing it from sale and disposing of it.