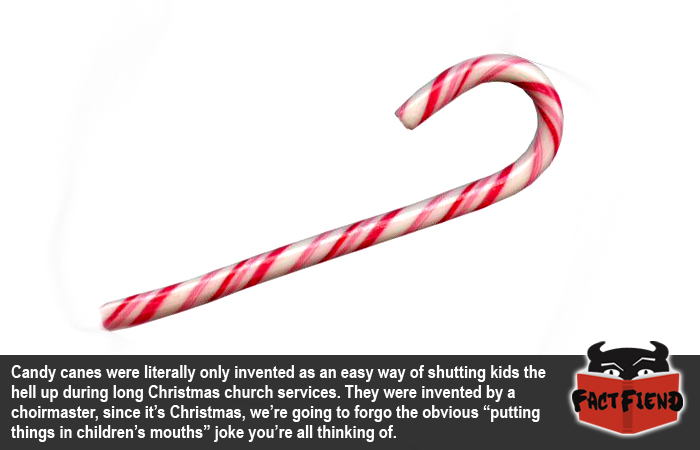 Candy canes are a Christmas staple, a sugary snack you can turn into a crude stabbing implement just by sucking on it, few people realise though that literally the only reason candy canes exist is because one guy wanted a foolproof way of shutting kids the hell up at Christmas time.

Though it seems like a modern invention spewed out by a bloated, capitalist society looking to squeeze a few more calories into your Christmas-time diet, candy cane goes all the way back to 1670. The earliest incarnation of the candy cane, often referred to as “Proto-canes” (by us) was invented when a young choirmaster at the Cologne Cathedral grew tired of kids not shutting their damn mouths during long Christmas services. Realising that he couldn’t just give the children a strip of sugar in the house of the lord, (apparently being nice to people for no reason near Christmas wasn’t at all very Christian back then) the choirmaster bent the sugar sticks at the end and claimed they were supposed to be represent Shepard’s crooks.

Of course it’s easy for us to see that this was a crock of shit and that it was just a very flimsy excuse for the choirmaster to cram sugar down kid’s throats so he could enjoy his Christmas without a bunch of screaming kids (hey, we’ve all been there, right?). No one in the church realised and eventually these sugar sticks, which were literally an idea that was pulled out of someone’s ass, became a Christmas tradition.

Over the years the recipe and traditional crooked shape was elaborated upon, for example the red and white striped are supposedly “symbolic to those of the Christian faith” the fact that, that we couldn’t even find an explanation for what that means doesn’t exactly fill us with much faith that any of that is true. Instead we’re more inclined to believe that people simply realised that these things were rad and then just claimed they were totally a Christian Christmas tradition without ever bothering or trying to explain why in the hopes nobody would think about it too hard.

The weird thing is, that’s not even the last the church had to do with candy cane history, for example, Bob McCormack is noted as one of the earliest people to make candy canes to sell them. At first he was limited to only being able to sell them to local people as he had to make each candy cane by hand, this continued for years until his brother-in-law, who just so happened to be a Catholic priest invented a machine that automated the entire process.

We’re not saying God or the church was any way involved, but what we are saying is that if you like candy canes, you owe Jesus and the church about 6 high-fives.