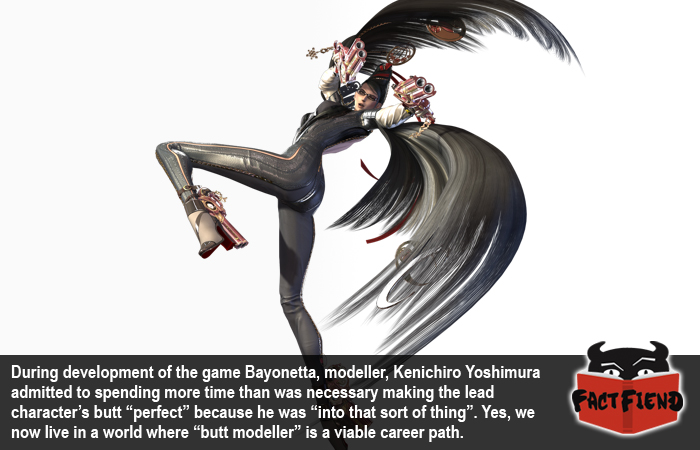 If you’ve never played the Bayonetta game, you probably should, it’s actually pretty radical, seriously there’s a scene in it where you drop-kick a dragon into outer space. Although the game is indeed a fine action title with plenty off ass-kicking, the most noticeable thing about it is the main character and how sexualized she is. Well there’s a reason for that, they spent a long-ass time making sure she looked as fine as virtually possible.

For example the titular (hehe) Bayonetta was modelled after a number of real world models because the designers wanted to make sure that a real human female could have the same generous proportions as their main character.

The thing is, this meant that the people tasked with designing Bayonetta were literally paid a wage for looking at pictures of beautiful women and picking their favourite part. But by far the person who took advantage of this the hardest was one, Kenichiro Yoshimura, who keen to make sure Bayonetta looked perfect, spent an unreasonable amount of time modelling her ass.

When questioned why, Yoshimura essentially shrugged (indicating that he was an ass man) and then promptly refused to say anything else on the matter. Seemingly in an attempt to let the wondrous virtual ass he’d sculpted speak for him. Which it didn’t because it was both and ass and virtual. Two things Yoshimura should really have been aware of seeing how long he actually spent modelling it.