If cartoons and pop culture have taught us anything about animals it’s that bloodhounds have a great sense of smell and that cartoon cats suck the fat one at catching cartoon mice. However, few people realise just how amazing a bloodhound’s sense of smell is.

If a bloodhound’s sense of smell was a boxer, it’d be Mike Tyson with a shotgun whereas virtually every other nose in the animal kingdom including ours would be Little Mac with the words “Shoot here” scrawled across his chest.

With almost 4 billion olfactory receptor cells crammed up their noses bloodhounds can smell indivudual cells, humanity has to peer through 400 years of lens technology just to get a closer look at a cell and all a bloodhound has to do is slightly move its head towards the freaking ground and inhale. That is how good they are.

On top of this a bloodhound can smell back in time, whereas humans lose the scent of a fart after 3o seconds before having to engage in a rap battle to decide who supplied it, regardless of how much they wish to deny it. Bloodhounds can detect a scent hundreds of hours after the source has long since dissapeared like so many farts in the wind.

That’s not hyperbole either, right up until 1954, the record for the longest a trail had gone cold while still being picked up by a bloodhound was 105 hours. Said trail was picked up by legendary bloodhound and tracking dog, Nick Carter, who managed to track the hundred hour old trail and find a suspect involved with the burning down of a house. Proof that even fire won’t clense you of the telltale stink of crime.

This record was promptly smashed when 1954 rolled around and a family went missing in Oregon. After around a week (40 hours longer than the previous record held by the greatest tracking dog in history managed) a local bloodhound owner asked the police if they wanted his help, clutching at straws and positively leaping at the chance to see a cute dog, the police agreed.

Several days later the unnamed man and his dog arrived and despite the trail being over 300 hours old, they managed to track the family to a clearing, where they had all sadly died of exposure to the elements. Weirdly, despite being this being perhaps the single greatest instance of tracking by a bloodhound in history, no one, anywhere decided to record the name of the dog responsible. Leading us to believe that the dog’s name was so mysterious, even he/she couldn’t track it down. 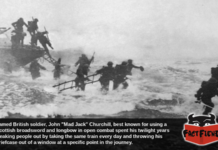