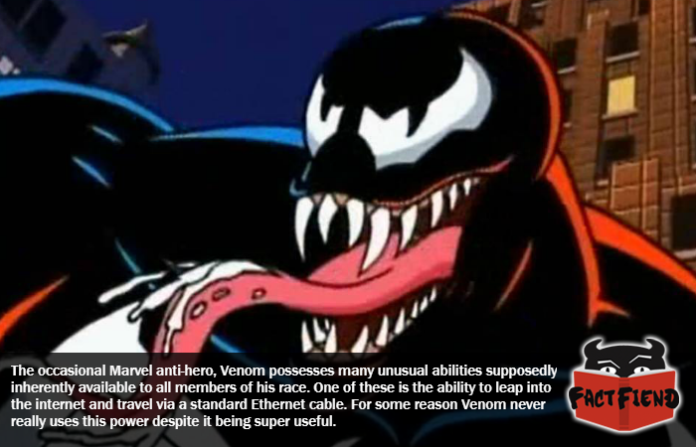 In Marvel canon the Venom symbiote is a character with many, shall we say, unusual abilities as a result of its unique and literally alien physiology. One of the most strange being the ability to leap directly into the internet and travel via the medium of Ethernet cables.

To explain, while best known for being an occasional enemy of Spider-Man and being in two shitty movies, in the comics it hails from Venom has a rich and rather convoluted history. Some of which we’ve covered before in another article. The most important aspect of this history being that Venom is an alien from a mysterious, nameless world with a host of amazing, fantastical powers. 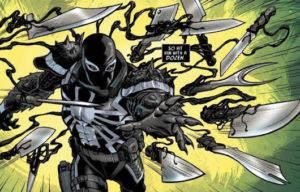 Now the majority of these powers stem from Venom’s Klyntar physiology which is noted as being highly malleable and adaptable to near enough any situation. For example, Venom can utilise it’s own biomass to attack or defend, turning parts of its own body into a living weapon that can be used to stab the shit out of people it deems a threat. 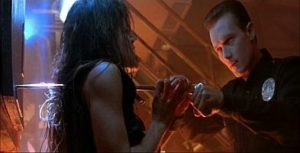 Other, weirder powers the Symbiote possess include altering the physical appearance of the person it is bonded to, blending into its local environment well enough to the point it seems invisible and the ability to “see” from every part of its body giving it a minor degree of extrasensory perception. Meaning it is almost impossible to sneak up on Venom and if you tried it’d probably spot you from half a mile away and then stab you in the penis with a knife made out of its own biomass.

Arguably the most bizarre ability demonstrated by the Venom symbiote though is deformation of its own body. Something the symbiote is apparently able to do to such a precise degree it can hide inside of electrical cables. Things get just a little weirder though because in one comic Venom is facing off with its unhinged kin, Carnage. Another Klyntar that is decidedly more, murdery. 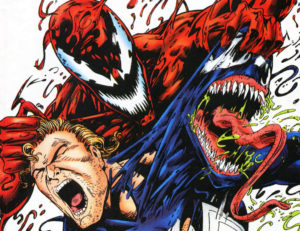 During one particularly violent encounter Venom inexplicably figures out how to break itself down to the molecular level and hide, inside of the internet. Something that understandably confuses Carnage who can’t understand how the fuck Venom pulled a move that baller. After a brief back and forth in which Venom taunts Carnage from a computer screen, Carnage realises that he too has this power and leaps into a nearby computer. Something worth noting is that both symbiotes do this when they’re bonded to people meaning each symbiote somehow breaks down the person it is bonded to, to their very base elements and then forces them into a fucking Ethernet cable. After which they both proceed to have a digital fistfight. 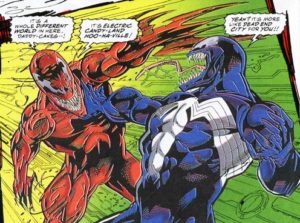 The weirdest part of this whole thing is that Venom never seems to want to use this power ever again despite the fact that leaping directly into the internet and then taunting people from a computer screen in complete safety is a super useful ability. We mean, imagine how difficult it’d be for Spider-Man to beat Venom if Venom exclusively from inside Spider-Man own computer.