Venom is a Marvel villain and occasional anti-hero defined by his unending obsession with bonding, both metaphorically and literally, with everyone’s favourite friendly neighbourhood Spider-Man. An obsession it turns out is partly the fault of Deadpool.

You see, for many years it was established in Marvel canon that Spidey was the first known host of the Venom Symbiote and that it was encountered during the Secret Wars storyline when Spider-Man is kicking all kinds of alien dick on a planet somewhere out in deep space. Specifically after noticing that his costume had been torn all to shit during a battle, Spider-Man is informed by Thor and oddly enough, the Hulk that there is a machine nearby that can create clothing from nothing. A machine you’d think the Hulk would have figured out how to recreate back on Earth given how often he explodes out of his clothes, but whatever. 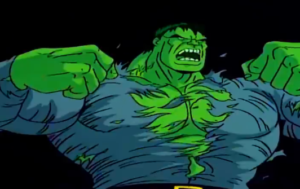 Despite being described in the comics as a mega-genius, Spider-Man inexplicably walks up to a machine that actually contains a violently psychopathic alien life-form rather than one that makes clothes. But hey, we’ve all been there, right? 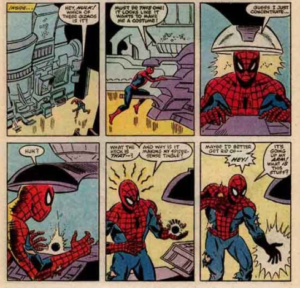 This alien life-form subsequently bonds with Spider-Man, granting him increased speed and strength as well as the ability to produce a near-unending amount of organic webbing. Over time the life-form, which later identifies itself as Venom, becomes completely and utterly obsessed with Spider-Man after deeming him to be it’s ideal host. After breaking free from the Symbiote’s grasp, it goes on to bond with a number of losers who can’t uppercut a man’s head off. All of whom share the creature’s obsession with the Wall Crawler. 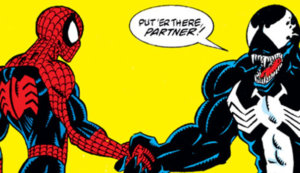 For decades Venom’s obsession with Spider-Man and general, dickishness was never really explained until a Deadpool comic released in 2015 which suggested the Merc with a Mouth might have something to do with it. To explain, in issue 3 of Deadpool’s Secret Wars, it is revealed that Deadpool momentarily bonded with the Symbiote when searching for the same machine as Spider-Man. 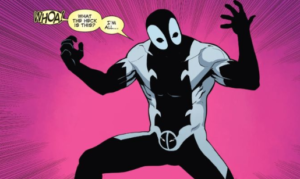 After checking out how great his ass looks in the suit (seriously) Deadpool realises the suit is alive when he notices it trying to read his thoughts. Showing uncharacteristic lucidity, Deadpool decided against utilising the the Symbiote’s power to save it from having to experience what it’s like to live inside his head. Deadpool even goes as far to note that doing so might drive the poor thing completely batshit insane. 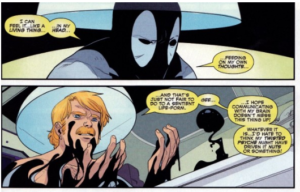 The story ends with Deadpool meeting Spider-Man and directing him over to the machine containing the now-insane Symbiote, seemingly unaware that he’s just set in motion a chain of events that will result in the creation of one of the most dangerous villains in Marvel Canon.

Deadpool, being Deadpool, never bothers to mention any of this to Spider-Man and as a result, Spidey has no idea that the hulking mound of alien goo that wants to eat his dickhole is so obsessed with him because a guy he knows touched it for like, a second.