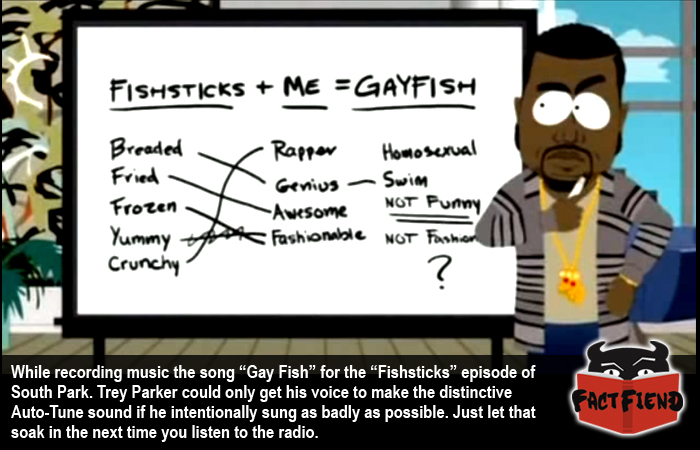 Trey Parker is the better named half of the creative duo behind South Park, though the animation style and general content of South Park may suggest the pair are rather childish, this just makes it all surprising that both men are remarkably talented musicians.

We’re not just saying that because we think South Park is the tits, Matt Stone and Trey Parker have been nominated for a freaking Oscar for their music before. Not to mention they perform and sing almost every song you’ve ever seen featured on the show, yes, including the one that’s sung almost entirely in Japanese. We don’t know how that proves they’re talented musicians, but we’ll take any excuse to post a link to that song.

Even if you don’t like any of the pair’s music, their show or even their haircuts, their vocal range and talent is undeniable, hell, it reportedly takes them just 30 minutes to record all of the dialogue for a 22 minute long episode. Because oh yeah, in case you didn’t know, Stone and Parker voice almost every character you see on screen, throw in the fact that they write, direct and record each episode in a week and you’d have a pretty solid case that somewhere along the line one of them beat the shit out of a Gryffindor and stole their time-turner.

Moving back on to the subject of music though, while recording an Auto-Tune heavy number entitled “Gay Fish”, for a thirteenth season episode of the show lambasting Kanye West, the pair decided early on that the song had to include the very distinctive Auto-Tune singing that’s been used to death in recent pop music. We’d link to a song as an example of what kind of singing we mean, but honestly why would we link to anything other than “Gay Fish” itself?

If you’re still not familiar with what we mean and are unable to click that link, just think of any song sung by T-Pain and you’ll get the idea. Now many, many artists have tried to defend their use of Auto-Tune, as such, how much it actually helps a given artist’s voice isn’t clear, because well, no singer is going to admit you have to sound like you’re trying charm a snake made of screaming dicks into someone’s ear for it to work. Luckily, Trey Parker isn’t a singer by profession.

On the commentary track for the episode in which the Gay Fish song is used, aptly titled “Fishsticks”, it’s revealed that when Parker first tried to record the song he couldn’t get Auto-Tune to work with his voice. After several takes and ruling out the sound guys “being douchebags”, they realised that this was because unlike virtually every person they were currently trying to parody, Parker could sing in tune. He even noted that if you sung into the thing properly, it wouldn’t actually do anything to your voice, since why would Auto-Tune kick in if you’re already singing in tune?

In the end, Parker had to go out of his way to sing as badly as possible to make Gay Fish sound like a modern pop song. In Parker’s own words “You had to be a bad singer in order for that thing to actually sound the way it does“. In other words, a guy who once sung a song called “Uncle Fucker” is a better and more honest singer than half of the artists currently in the charts.

We’d say we’re surprised but honestly, we’ve been wanting to type that sentence since forever.