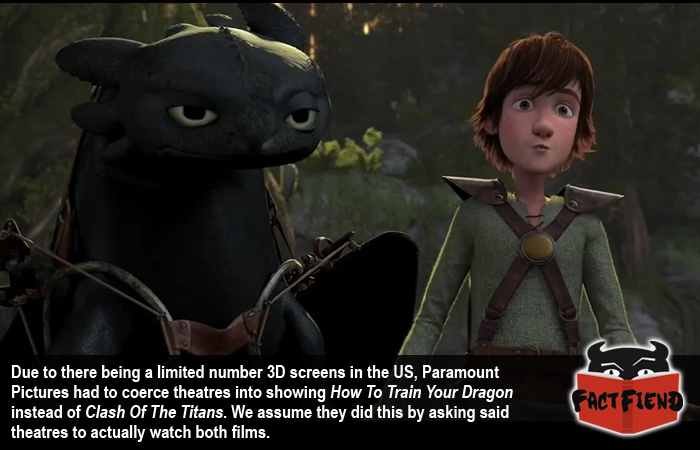 How To Train Your Dragon is one of the most highly rated animated movies in recent history and one of the most critically acclaimed 3D movies ever made (with perhaps the exception of Jackass 3D). Odd then that to even get theatres to show it, it had to compete with the film that nearly killed 3D movies, Clash Of The Titans.

That’s not us being pretentious dicks by the way, Clash Of The Titans was such a terrible movie that it literally almost killed 3D as a format altogether and the director openly admitted that the film was a steaming pile of donkey shit in a heroic interview months after people had already paid to see the film. However, no one knew that prior to release and due to the fact it required a very limited resource at the time (a 3D capable theatre screen) it had to compete directly with How To Train Your Dragon. 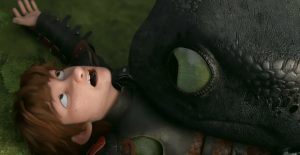 Now Paramount Pictures (the studio behind How to Train Your Dragon) knew this. So to ensure that they got the much needed screens to show their objectively much more awesome 3D movie they played hard-ball and basically told theatres, “if you don’t tell those guys who made Clash Of The Titans to eat a dick, you can’t even have the 2D version of our movie“. We’re of course paraphrasing for comedic effect, but the short version of the conversation the studio had with theatres basically boiled down to, fuck you, pay us.

This left hundreds of theatres in a massively awkward position, since at the time, none of them had any idea how well each film was going to be received. Now with the benefit of hindsight we know that How To Train Your Dragon is the better movie and that theatres should have chosen it over Clash of the Titans in a heartbeat, but think about the choice they had to make before any critics saw this thing. Theatres were essentially being asked to chose between showing a film about CGI Liam Neeson wearing a suit made of diamonds kicking the entire pantheon of Greek gods square in the dickhole, or one about dragons and how to train them to do your bidding. Anyway you look at it, that’s not a choice you make fucking lightly.

You may not agree with this tactic, but it becomes a little more forgivable when you realise that the film Paramount Pictures were tying to stop people from seeing was, Clash Of The Titans. It’d be like being mad at someone for stealing your car when they left a blowjob powered Prius in its place for you to use instead. Unsurprisingly, these heavy handed tactics worked and theatres, not wanting to miss out on cashing in on the much easier to sell movie about dragons kicking all kinds of ass, ended up bending to Paramount Pictures’ will and gave them the screens they asked for.

Clash Of The Titans on the other hand was released to middle of the road reviews and caused a nationwide shortage of shits to give when it tried to build up hype for the brand by announcing a sequel.

For some reason being able to keep the case your DVD comes in is now a special feature worthy of being advertised.