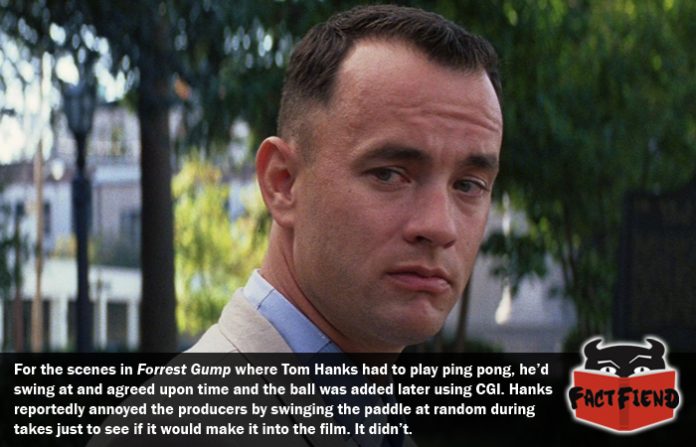 CGI can be used to accomplish a ton of awesome shit from reaching into the past and dragging prehistoric creatures into the present to headbutt Land Rovers to lovingly rendering Optimus Prime’s balls. Likewise, CGI can also be used for decidedly more mundane tasks, like in the film Forrest Gump, where it was used to animate ping pong balls.

For anyone who hasn’t seen it, about mid-way through Forrest Gump the titular character discovers he has a knack for the sport of ping pong while serving in the army.

Gump practises and practises, eventually becoming adept enough to hold his own against the dick-stomping ping pong god-kings known as the Chinese national team.

While Hanks, the actor who played Gump is self-admittedly a very good ping pong player which came in handy during the initial scenes where he learns to play, he was nowhere near good enough to play at a world-class level for scenes of him playing against a supposed actual master of the sport. So instead the producers put Hanks and some guy on either side of a regulation table and told them to just swing their paddles at random while filming it. The plan being to add the ball in later using CGI.

The problem was that the guy they got to serve as Gump’s unnamed opponent in the film was actually one of the world’s leading players at the time and for some reason he sucked an unreasonable amount of donkey turds at playing pretend ping pong. To help things along, the producers played the sound of a metronome which got increasingly faster as time went on and asked the pair to swing when they heard either a tick or a tock. This crude solution worked and the team working behind the scenes were able to use CGI to give the impression that Hanks and his co-star were slapping the ball at each other at mach 3.

The thing is, pretend ping pong is pretty tiring and Hanks wasn’t exactly enthused with waving around a paddle for 4 hours while listening to the tireless droning of the world’s most excited metronome. This led to Hanks doing what is known in the film business as “taking the piss” by lazily slapping the ball with one hand or lying down mid-serve.

Sadly, the producers didn’t have a sense of humor as good as Hanks’ so they never decided to include any of these shots in the final film, which sucks because they kind of would of fit with the idea of Gump being an idiot savant who stumbles ass-backwards into success. 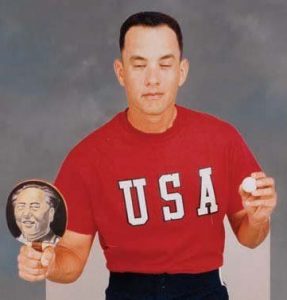