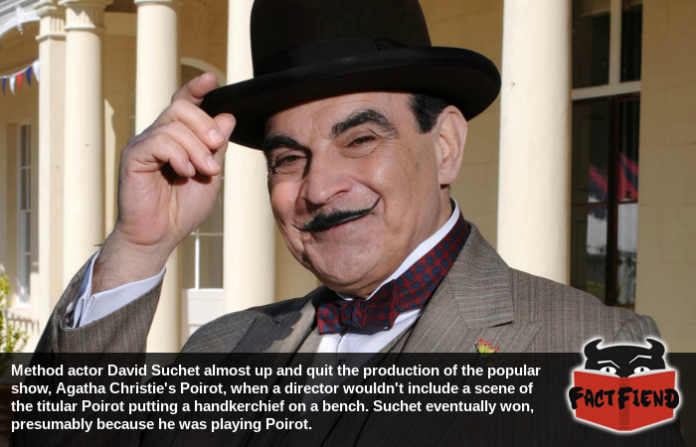 There are a lot of kick-ass fictional detectives out there capable of solving complex, police baffling crimes in less time than it takes most people to take an exceptionally large shit. Amongst the most famous is Hercule Poirot, a Belgian detective noted for his numerous eccentricities. A facet of the character an actor once deemed so important to realising him on screen that he threatened to quit production if they were not included.

That actor was David Suchet, an esteemed British performer who cut his teeth in the world of theatre and is known and respected throughout the industry for his dedication to portraying characters he’s tasked with playing as accurately as possible. Think Daniel Day-Lewis if he looked like a bank manager from the early 20th century.

As you might expect then, when Suchet was cast as Hercule Poirot, a character hailing from a series of novels by author Agatha Christie, he immediately set about reading literally everything Christie had ever written featuring the character, making notes as he went. According to Suchet, the dossier he eventually compiled on Poirot was so detailed that even things as minor as how Poirot took his afternoon tea was listed.

Suchet was reportedly so dedicated to portraying Poirot exactly as he was written in the books that he would never break character during filming and even stayed in character during breaks. Which ended up being, to put it bluntly, a complete ball-ache because Poirot is kind of annoying.

You see, in the original novels he appears in, Poirot displays numerous obsessive compulsive traits and has a long-list of charming but grating idiosyncrasies. These include, but ate not limited to, cutting his toast into perfect squares before eating them, arranging all of his books in height order and only eating eggs that are identical to one another in shape and color. Hell, in one book the detective absolutely refuses to eat a loaf of bread, noting when pressed that he can’t eat it because it’s “irregularly sized“. 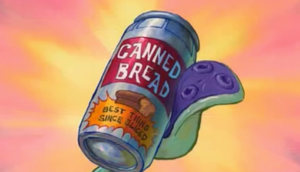 Not wanting to break character, Suchet of course did all of these things during breaks and the like while filming, leading him to once diplomatically describe the character as “irritating and insufferable“.

The results though spoke for themselves and it’s widely agreed that Suchet’s portrayal of Poirot is the best ever seen and his 25 year run playing the character earned him scores of awards and praise from both critics and peers. A fact that makes it kind of hilarious that a director once tried to tell him how the character would act during the first season of the show.

To explain, in Suchet’s autobiography he revealed that on like the first day of filming the first season of Poirot a scene called for him to sit on a park bench. Wanting to stay true to the obsessive and meticulous nature of the character, Suchet did so, though not before neatly placing a handkerchief onto the bench first. 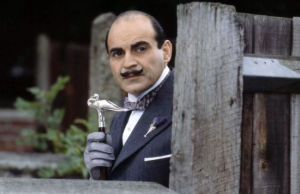 According to Suchet the director of the scene went ape shit when he did this, saying the whole thing looked ridiculous and to do the scene again without the handkerchief. Suchet stood his ground, asserting that Poirot as he was written in the books would absolutely do this before sitting on a dirty bench. As a reminder, Suchet read every single piece of literature featuring the character and carried around a stack of notes about him during filming. To show he was dead fucking serious, Suchet then told the director he would quit on the spot if the handkerchief moment was cut.

Fearing that they’d lose the star of the entire show a producer stepped in to adjudicate the whole thing, at which point Suchet handily pointed out that Christie had literally written in one of her books that Poirot “dusts dirty chairs on park benches“. Upon learning this the producer mysteriously decided to side with Suchet and told the director to film the handkerchief scene.