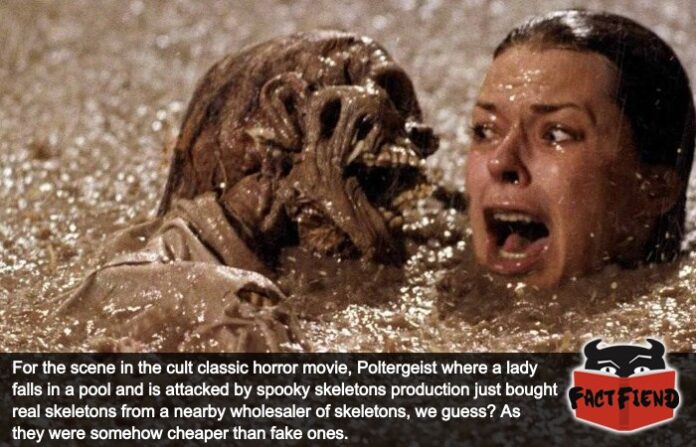 Poltergeist is a film where an all American family is besieged by vengeful ghosts when they move into a house that was inexplicably built on top of like 5 graveyards worth of corpses. A horror classic filled to the brim with iconic and dare we say, very spooky visuals the film was a huge hit on release, which isn’t surprising considering it features a scene where an actress is harassed by real human skeletons.

To explain, at the climax of the film, after witnessing many a spooky occurrence and realising that their house is the big-haunted, shit starts to get, well, a little real. Which is perhaps the most diplomatic way of saying that hell-demons from the fuck-you-dimension try to move into their house. 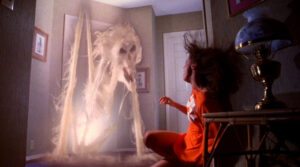 Arguably one of the most shocking and well known moments from this sequence is one in which actress JoBeth Williams falls into a muddy pool and has her world turn entirely to skeleton. 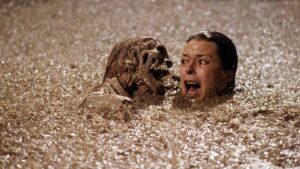 Skeletons that, as it turns out, were real, as in they were the actual remains of people who’d died that the production sourced and hurled at Williams as she swam around a pool filled with fake mud. Hollymud if you will.

Moving past that amazing pun, the skeletons were reportedly acquired from a local medical supply company that just so happened to have a surplus of bona fide human skeletons. Which answers where they came from but doesn’t explain why production felt that they had to use the actual decaying remains of real people in their movie about people being haunted to fuck for insulting a graveyard’s worth of skeletons. It’s like, did they even watch the film they were making? No wonder this film is reported to be cursed as fuck.

Anyway, as it turns out, production did try to acquire some fake rubber skeletons but decided against it when the price they were quoted ended up being higher than the cost of a real skeleton. As a result, production just ended up buying a bunch of dead people’s bones from that supplier we mentioned and made them up to look a little, meatier.

Now while this is the most common version of events as far as our research found, it’s worth noting that at one point a guy claiming to have worked on the film said that they used real skeletons not because they were cheaper, but because prop skeletons didn’t exist at the time. A claim countered by the astonishing number of black and white films we found starring rubber skeletons.

Either way, what we do know for sure is that the skeletons were real and that very few people working on the movie were aware of this fact, including JoBeth Williams who spent five days swimming around a cold, muddy pool slapping them around. When asked years later if she had any idea that the skeletons were real Williams noted that she did not and that she, and most of the crew, operated under the assumption they were fake because nobody thought production were insane enough to use real ones. 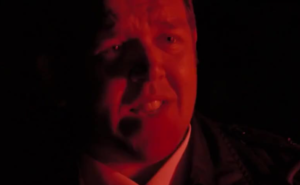