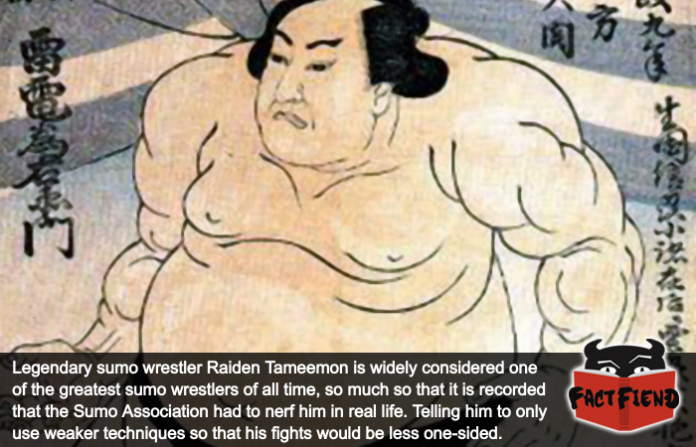 Sumo is a combat sport in which massive barrel shaped men try to kick the everloving fuck out of each other to prove their dominance. Infamous for it’s total and complete lack of weight classes, which invariably sees only the roundest mounds of man succeed, the sport is notable for having some of the most impressive streaks of any sport where people push each other over. Perhaps the most well known is Seki Tarōkichi, a wrestler so dominant he had to be nerfed in real life.

Born in the late 18th century, Tarōkichi was introduced to the world of sumo at the tender age of 14 by his father who realised that his son would probably be good at it when he noticed that he was literally two feet taller than every single one of his peers and a clear head taller than even the stoutest man of his village. An invaluable, bordering-on-unfair advantage in sumo due to the aforementioned lack of anything like weight classes.

As a result of this, by virtue of simply being so comically large in comparison to pretty much everyone else in Japan at the time (at his peak Tarōkichi stood an imposing 6ft 5 inches tall in an era when the average man was like 5 feet and change), the young sumo was able to best seasoned wrestlers through sheer brute strength. 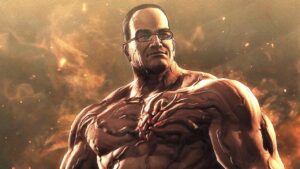 Once his prodigious strength had been tempered through rigorous sumo training and his massive frame given the added bulk of a hundred pounds of muscle, Tarōkichi was virtually and to some extent, literally unbeatable. In fact, Tarōkichi still to this day holds the record for best ratio of wins. Losing only 10 matches in over 300 sumo bouts, in part, because he was simply too fucking massive for anyone to move, let alone lift of push over. In recognition of his awe-inspiring power and explosive potential for sumo-flavoured ass-whooping, Tarōkichi was given the ring name Raiden. Quite literally, the Thunderbolt.

Now while you’d assume being fucking unbeatable would be a good thing, Japan’s Sumo Association was worried that Raiden’s never-ending curbstomp symphony of the rest of Japan’s sumo talent would cause fans of the sport to become, bored. As a result they took to limiting the number of techniques Raiden could use in a match, effectively nerfing his real-world moveset to give his opponents a sporting chance.

Even then, Raiden still won a reported 96% of his matches, a number that could have been way higher if he’d been allowed to flex the full might of his sumo-prowess and body-check the fuck out of everyone using his massive ungainly frame and thick-as-treetrunk thighs.