H.R. Giger is an artist best known for one thing, the terrifying penis monster drawings he made that served as the inspiration for the Alien from Alien. Despite being the original creator of one of the most iconic creatures in all of horror and sci-fi, Giger was seriously screwed over by virtually every sequel, but was especially screwed over by Alien 3.

For example, as mentioned above, during the production of Alien 3 Giger personally constructed a life sized model of a brand new Alien for the effects crew to use however they wanted, free of charge and they turned him down. What we didn’t mention because we ran out of space and because we forgot when we made that image is that Giger did this after being hired to work on the film and ultimately being told to fuck off just a month later when the studio told him they had their own idea of what the Alien in the movie should like. Despite suffering the indignity of being told by some dipshit Hollywood executive that they had a better idea of how a creature based entirely on his art should look, Giger continued to fax over sketches and call the studio asking if they wanted his help, for free, because the Alien was his baby and he wanted it to look as badass as possible.

But here’s the kicker, the Alien the studio ended up making ended up looking almost identical to one of Giger’s earliest drawings anyway and according to an interview with a former member of Stan Winston studios who helped create the Alien seen in the film, they used Giger’s art as the basis of the design and had the cheek to say that their goal was to create something more Giger-esque than the Alien in the original movie, you know, the fucking Alien Giger himself designed personally!

What’s worse is that, despite the makers of the new Alien openly admitting to basing it entirely on Giger’s art style and original sketches, Fox didn’t put his name in the credits. Something Giger only found out when he was sent an early copy of the film ahead of its release, which is sort of like breaking up with someone and tagging them in all the photos of you and your new partner. When Giger politely asked if he could be properly credited because fuck you, he invented the Alien, Fox told him it was too late to change anything in the film and started ignoring his calls. The guys who designed the Alien for the film, which remember was based on one of Giger’s own drawings, also shit all over the artist by saying that their version of the Alien was better than Giger’s in interviews. For arguments sake, here is one of Giger’s original pieces of concept art for the film. 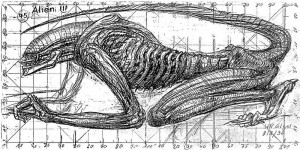 And here’s a model of the “superior”, totally original version created by the guys brought in to replace him: 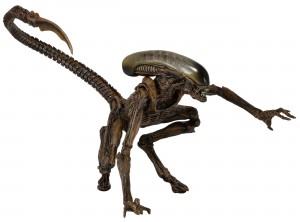 Giger, in a display of class and swagger you wouldn’t really expect from a guy who drew face-raping dick monsters for a living, was the bigger man about the whole thing and still gave the movie his blessing, even after Fox tried to screw him out of getting proper credit for his work again by refusing to pay him any royalties on Alien merchandise based on his drawings. It was only when Giger refused to be interviewed for a documentary about Alien 3, the same movie Fox were trying to say he had nothing to do with, that they finally stopped being vinegary nutsacks long enough to give the artist the accreditation he deserved.

Today, copies of the movie give Giger proper credit. Though it still sort of sucks compared to Aliens, a movie Giger apparently didn’t that much really like because he thought James Cameron made all the Aliens look retarded. Fun fact: James Cameron also refused to consult Giger when making Aliens because he thought he could design one that looked cooler than him.