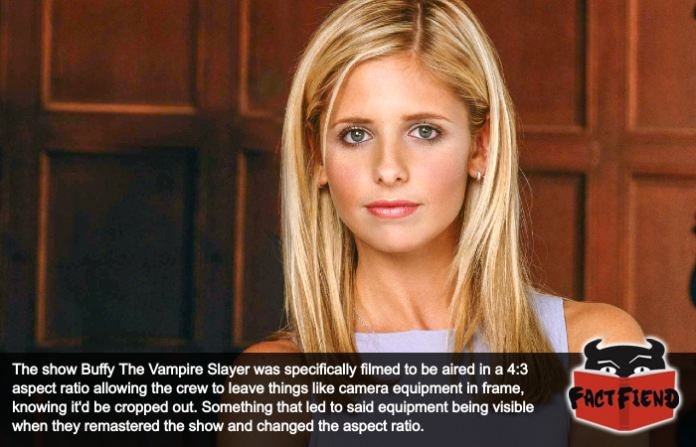 Buffy the Vampire Slayer is a TV show about, funnily enough, a vampire slaying teenager called Buffy. A ratings smash and cultural touchstone for an entire generation, the show was lauded for its direction, storytelling and the amount of fuckable vampires it contained. Vampires that a HD remaster of the show made look like they should be bursting into flames in every other scene.

To explain, the show first aired before the widespread adoption of widescreen television and as a result, it was filmed and aired near exclusively in a 4:3 aspect ratio. One notable exception being the episode, Once More, with Feeling, which was filmed in 16:9. 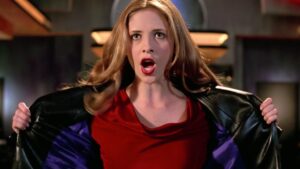 Anyway, according to series creator Joss Whedon, the intention with Buffy was always to air it in 4:3 and every episode besides the one mentioned above was filmed with this firmly in mind. Something Fox decided to ignore the shit out of when they remastered the show against the direct wishes of virtually everyone involved with its production.

Widely considered one of the worst remasters of a show ever, the HD version of Buffy sucks harder than one of the show’s many vampires and features countless examples of some truly baffling decision making.

For example, for the remaster each episode was converted to widescreen, which is usually done either by cropping the episode or using the original raw footage, with the Buffy remaster making liberal use of both methods. So what’s the problem with that? Well cropping the footage, whilst relatively simple, left many shots in the remaster looking oddly zoomed in.

However, the real fuckery occurred when Fox took the original footage which admittedly was shot in 16:9 but was never meant to be used without being cropped to 4:3 first. In fact, Whedon was so confident about this that he’d sometimes film with crew members fully visible in frame, knowing they’d be cut out when the footage was cropped. Something Fox clearly weren’t aware of leading to shots where you can plainly see members of the crew standing in the background in the remaster.

Hell, in one episode a vampire is taunting Buffy from off screen, or at least he is in the original because in the widescreen remaster he’s like, right there. 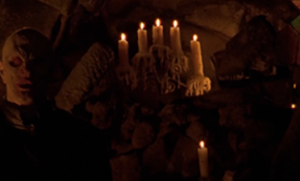 By far the most amazing alteration made to the remaster though was to the brightness. Which was carefully controlled in the original show, with many scenes being filmed during the day and then artificially darkened in post-production to make them look they were taking place at night, a common film-making technique that was understandably used quite extensively on Buffy given that half the cast were fucking vampires.

Which in addition to annihilating the original tone the show was going for, result in the scenes making zero sense considering that according to the lore of the show, this is what’s supposed to happen to vampires in the Buffy universe when they’re exposed to sunlight. 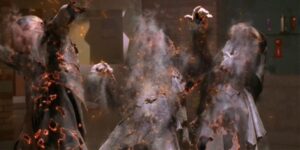 Understandably the remaster was widely panned and was so poorly received that you can’t buy it anymore. Which is a shame because it sounds like a pretty amazing drunken watch.