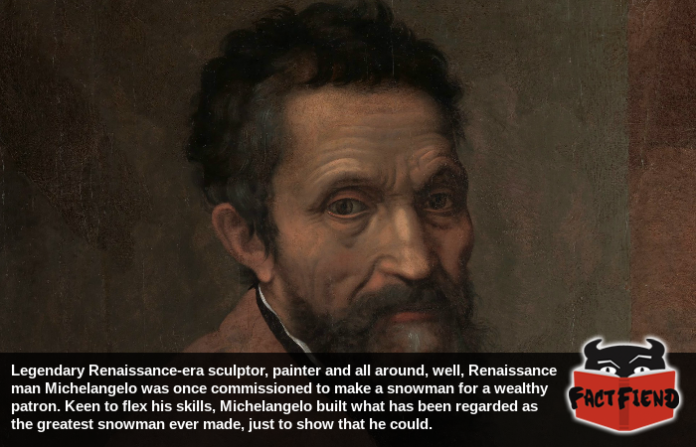 Michelangelo is oft considered by many to be the prototypical “Renaissance Man” and he’s single-handedly responsible for some of the greatest works of art ever seen. Amongst the countless masterpieces credited to Michelangelo perhaps the most curious is one that nobody will ever see. A giant, immaculate man made of snow.

Now the genesis of this legendary snowman is January of 1494 when an unprecedented amount of snow fell on Florence, leaving the city covered in several feet of perfect, Colgate-white snow. A rare event that saw even the stuffiest of aristocrats looking to take advantage of the unseasonably cold weather and the snow it brought by having the many artists that called the city their home construct massive snow-statues on their property.

If you’re currently sat wondering why rich people would even bother to waste money on something that, by it’s very nature, would disappear in like a week, the answer was largely to style on the plebs who couldn’t afford to have perfect snow-sculptures hand-crafted by master craftsman constructed just outside their bedroom window. 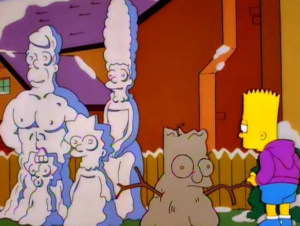 More specifically, it was reportedly a tradition for the artists of Florence to make snowmen whenever snow fell on the city and it quickly became a competition of sorts between noblemen and other rich dickheads to see who could commission the most opulent and extravagant snowman possible. Enter Piero de’ Medici, an incredibly wealthy man whose family basically ran Florence and also just so happened to have a teenage Michel-fucking-angelo at their beck and call.

Wanting to outdo his peers, Medici instructed Michelangelo, who was barely into his 20’s at the time, to use all of the snow in his courtyard to construct the largest and most magnificent snowman possible. Curiously while you’d think an artist as famous and talented as Michelangelo would consider himself above such a trivial, literally pointless task, he was apparently keen to test the limits of his craft and reportedly constructed a towering, imposing snowman who judged all his gaze fell upon.

Sadly, exactly what this snowman looked like has been lost to history and all we really know about it is that it was probably one of the best things the artist ever sculpted in his lifetime, perhaps even surpassing his magnum opus. The David.

Speaking of which, Michelangelo’s snowman was reportedly his first attempt at sculpting a giant man, meaning that the snowman was, in all likelihood, a giant buff guy with a massive snow-dong that was literally flexing on the entirety of Florence. Which we’re a fan of for some reason.