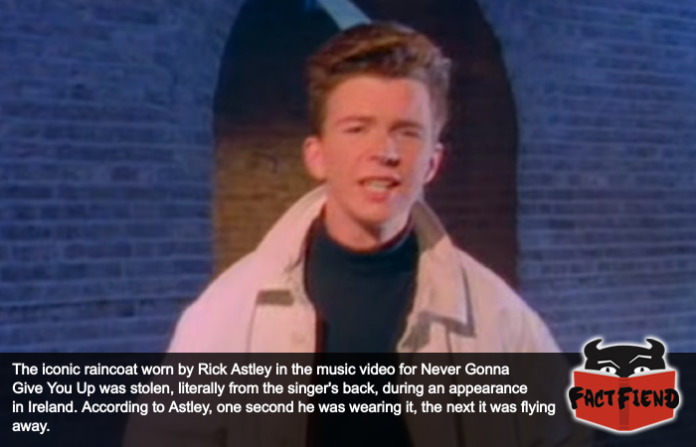 Rick Astley will forever by synonymous with the image of his younger self dancing around like a jackass in an ill-fitting raincoat. A raincoat, that despite being one of the most iconic things from his career, is something he no longer owns after he witnessed it fly away during a meet and greet.

First though for anyone curious about the origins of The Coat, according to Astley, while many assume the coat was a prop or something like that, it was actually an item of clothing from his own wardrobe. In fact, everything you see Astley wearing in that video is something he owned because they didn’t really have a budget for that kind of thing and as a result, Astley just turned up wearing what he felt comfortable walking around in. Which means every look Astley sports in the video is how he actually dressed in real life at the time.

Which brings us to, The Coat, because like everything else in the video, the coat was a treasured item of clothing from Astley’s wardrobe with the artist later noting that the clothes seen in the video represented his favourite outfits at the time. A fact that understandably resulted in Astley wearing many of the outfits following the release of the song to events and such. Reportedly to the amusement of interviewers, some of whom assumed that the coat was part of his brand or something when in reality, Astley just really liked wearing it. Which inadvertently led to it flying away.

You see, Astley liked the coat so much that, as mentioned, he took to wearing it to events and concerts following the release of Never Gonna Give You Up. The problem was that the song was Astley’s first hit and it was a fucking big one, so many of these appearances drew massive crowds that Astley and in many cases, whole-ass venues didn’t know how to handle.

Which brings us to one fateful appearance in Northern Ireland where Astley was besieged by a crowd of teenagers, one of whom quite literally snatched the coat off his back. According to the singer the last time he saw the coat it was being propelled across the top of the crowd at half the speed of sound. Moments later, it was gone, never to be seen again.

This story does have a somewhat bittersweet ending though because according to Astley he occasionally witnesses this exact moment in reverse at his concerts. Specifically he’s noted that people will wear the coat to his concerts and then pass it to him when he sings Never Gonna Give You Up. A surreal experience the singer has learned to find humour in, even if it probably brings up painful memories of one of his favourite items of clothing last being seen on a radar screen.