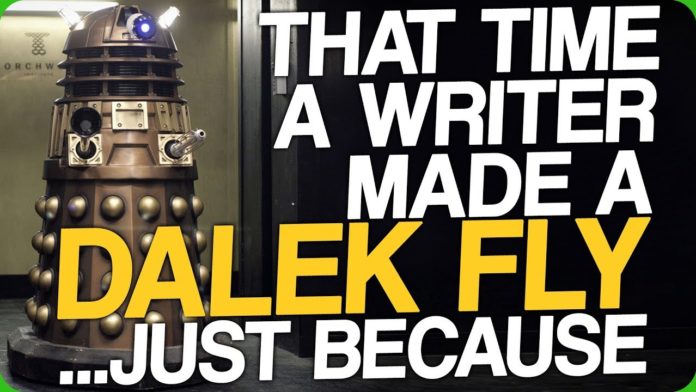 Hailing from the Doctor Who universe, the Daleks are one of the most iconic, memorable and fearsome creatures ever featured in the series. This is despite the fact for many years it was believed they couldn’t even climb a flight of stairs.

If you’re unfamiliar with the Daleks, they’re an alien race of total and utter dickwads who cart themselves around in a near indestructible metal shell that looks exactly like an artisanal buttplug mated with a Roomba.

Within Doctor Who canon it is established that the Daleks are feared across the known universe for their habit of obliterating human skulls with their superior robotic appendages and crushing all who appose them beneath their cold, unforgiving metal treads. The Daleks are almost wholly indestructible, know no emotion except rage and can suck your brain out of your skull using a robotic weapon that looks exactly like a plunger. Which along with being a shitty way to die, is a horribly embarrassing thing to have written on your tombstone.

One apparent limitation of the Daleks however is that their seeming lack of mobility and for many years it was a running joke in the Doctor Who fandom that the greatest enemy of the eponymous Doctor Who couldn’t climb a flight of stairs. Although writers for the show insisted that the Daleks could climb stairs if they wanted to, budgetary constraints behind the scenes limited the mobility of the Daleks on screen to just scooting around at like 3 miles per hour, which didn’t exactly sell fans on the supposed agility of the most feared race in the galaxy.

You see the Daleks were a product of their time and while they looked awesome and scary to kids watching in the 1960’s, as the show went on more and more fans began to make fun of how shitty they looked when in motion. To address this sometime in the 80’s it’s rumored that the writers toyed with the idea of updating the look of the Daleks to make them more menacing to a modern audience but decided against it as their look was considered too iconic. Instead, one writer called, Ben Aaronovitch decided to use a series of episodes he wrote in 1988 to prove that the Daleks couldn’t be stumped by simply moving along the Z-Axis by showing that they can fly.

According to, Aaronovitch while writing the series Remembrance of the Daleks, he made it his mission to include a scene showing the Daleks conquering the shit out of a flight of stairs. This may sound stupid but you have to remember that prior to this serial fans had been joking that Daleks couldn’t deal with stairs for two straight decades and writers were sick of it. So, Aaronovitch wrote a scene in which the show’s protagonists attempted to flee from a pursuing Dalek by walking up a flight of stairs. Aaronovitch even included a nod to the fan theory the Daleks couldn’t deal with a slight incline by having the main characters then mock the Dalek for being stumped by something even a fucking slinky can handle. Then, to the shock of the millions watching at home, the Dalek responded by doing this!

That episode ended on a cliffhanger and it has been voted on of the series’ best moments because it established that nowhere is safe from a sufficiently pissed off Dalek and made the series’ most famous villain fucking terrifying again. At least for kids who’d felt they were safe from Daleks in their now evidently useless first floor bedrooms.