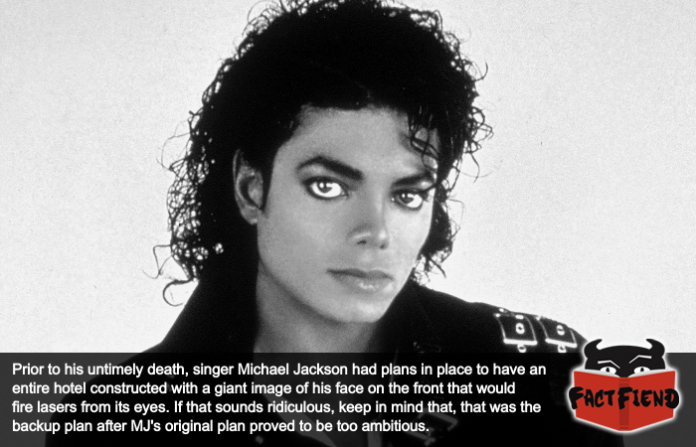 Prior to his untimely death in 2009 Michael Jackson was planning what would have been one of the most ambitious set of concerts ever seen in music. A 50 date residency at the London O2 Arena that would have seen the singer moonwalking half a marathon a night whilst belting out a medley of his greatest hits. As big as the tour was intended to be though, it paled in comparison to what Jackson initially planned.

To explain, according to a frequent collaborator of Jacksons called, André van Pier, in 2005 the singer started drafting plans for a similarly record-setting string of concerts in Las Vegas that ultimately fizzled out due to the sheer amount of balls-out insane stuff Jackson wanted to do.

For example, Jackson had Van Pier draft plans for a solar powered swag-jacket made of, and we quote, “space age material” that would change colour on command allowing the singer to basically be his own light show.

In addition, Jackson had plans to have an entire Michael Jackson themed hotel/casino constructed in Vegas for fans, staffed by a robotic version of himself and sporting a building sized image of his own face on its facade that would fire lasers beams into the sky from advertising his show.

As ridiculous as all that sounds these plans were Jackson’s backup plan after an even crazier idea of his proved to be unfeasible. This idea being to construct a 50 foot tall robot Michael Jackson that would roam the Nevada desert and would, again, fire lasers from its eyes to advertise his show.

It gets better though because Jackson planned for this robotic version of himself to patrol a patch of desert next to the McCarran airport, purely so that people landing there would have to see it. Sadly this 50 foot tall metal MJ never materialised due to budget concerns, which is a shame because there were apparently plans to make it moonwalk and that is something we’d have paid good money to witness if only to see it go berserk and rampage through downtown Las Vegas.