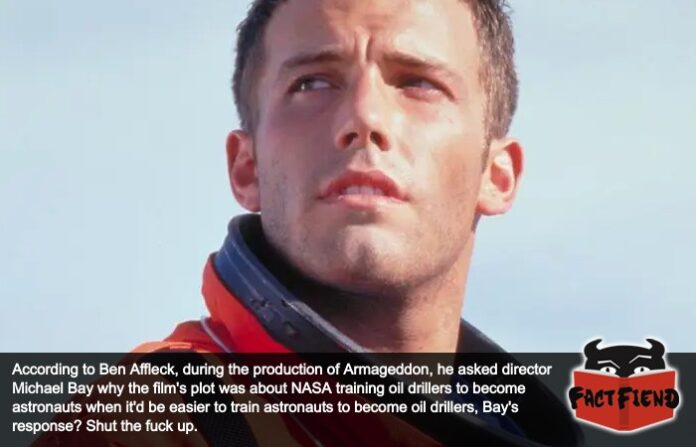 Armageddon is the quintessential Michael Bay film in that it’s shit and everything ends up exploding. Largely considered one of the most factually inaccurate movies ever made, the movie is literally used by NASA to demonstrate how little the average person knows about their job. Something Ben Affleck tried to mention to Michael Bay, only to be promptly told to shut the fuck up.

Something we feel compelled to mention is that nothing in that introduction is exaggerated and NASA really does use the movie as a teaching tool for prospective astronauts, asking them to spot and note each and every factual inaccuracy. Which for the curious, there are a lot of throughout the film. For example there are a reported 168 things that occur throughout the movies that are literally impossible and hundreds more things that are so improbable no right-minded person would ever believe them to be accurate, like Bruce Willis’ hairline. 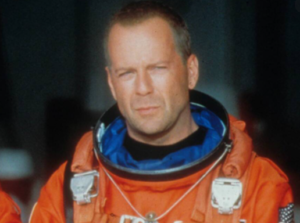 Anyway, the film is infamous for its bizarre, nonsensical plot, which for those of you who’ve blocked it from memory, revolves around a big-ass meteor threatening to destroy all life on Earth and NASA deciding that the only way to save the planet is by sending a motley crew of oil drillers into space to blow it the fuck up. A plot point so ridiculous NASA literally made Michael Bay put a disclaimer at the end of the film saying that just because they let him use their logo in the movie, they didn’t agree with or endorse anything featured in it.

As an idea of how bad the plot is, it’s noted that even the actors in the film were baffled by it. None more so than Ben Affleck. 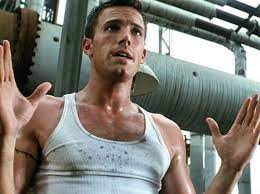 Specifically it’s noted that Ben Affleck directly confronted Michael Bay about the film’s plot, asking the director why NASA would bother training oil drillers to become astronauts when it’d be far easier to train astronauts to become oil drillers. With Affleck going in on the idea on the film’s commentary track, complaining out loud about the idea of Bruce Willis’ character bitching at NASA engineers about a drill when they build fucking spaceships for a living.

Not that any of this mattered because according to Affleck, when he raised this concern in front of Michael Bay the director stared him down and told him to shut the fuck up. Which only annoyed the actor more and prompted him to break down the logical inconsistencies of the idea further, asking Bay how in the hell it made more sense that oil drillers could learn to be astronauts in a week than it would for astronauts to learn how to work a drill. Again, prompting Michael Bay to tell the actor to shut the fuck up. Which at the very least, was very on brand for him.