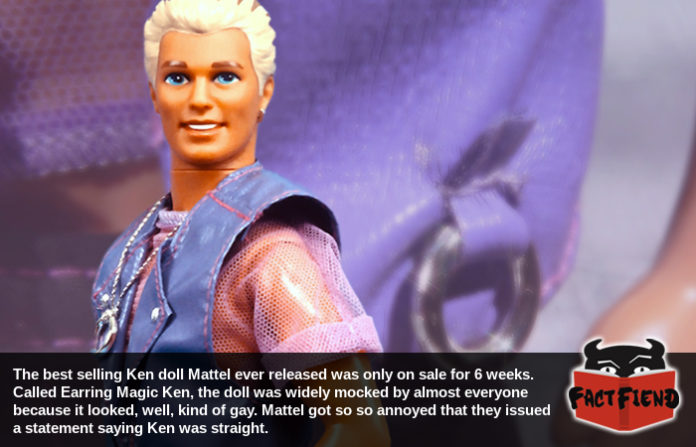 For decades Mattel has struggled to sell Ken dolls to little girls who’ve repeatedly had to explain to baffled Mattel executives that they simply don’t think he looks cool. When Mattel tried to address this in the 90’s they inadvertently made him look super gay. Much to amusement of the gay community.

Dubbed Earring Magic Ken, the doll was a failed attempt on behalf of Mattel to reinvent Barbie’s boyfriend after sales data indicated that nobody really gave all that much of a shit about him. The story goes that the company became somewhat desperate in the early 1990’s when they realised that little girls weren’t playing with Ken dolls even though they tried to market him as Barbie’s girlfriend. Which makes sense, why would little girls make Barbie date a loser like Ken when they could just raid their brothers toy box and have her date Cobra Commander or a stone badass like Action Man.

So Mattel asked a bunch of girls what they disliked about Ken and floated the idea of perhaps replacing him with another doll, in effect asking by proxy if Barbie should dump his ass. To Mattel’s surprise, little girls did like Ken, but most responded that they’d probably play the doll more if he looked, and we quote, “a little cooler“.

The problem was nobody working for Mattel at the time had any idea what 90’s era cool guys looked like, so they decided to remedy that by paying someone to do a little research. According to an oft repeated, possibly apocryphal story, this research involved attending a bunch of raves. Mattel would later deny this, but take a long hard look at Ken’s outfit and tell us he wouldn’t look right at home throwing shapes at a warehouse playing thumping techno music.

One thing in particular gay people singled out about Ken’s outfit was his necklace, which neither the box nor Mattel’s executives seemed sure of the function of at the time of the doll’s release. Gay people sure as hell did though and hundreds of gay commentators were quick to point out the the necklace was clearly a cock ring.

You see, it was en vogue back then for gay men to express their sexuality by wearing a cock ring on their clothes, there was even a subtle code gay men could use to express just what they were into in the bedroom. Before long a cock ring was the go-to fashion accessory in the LBGT community and nearly everyone was wearing one. It’s assumed then that someone working for Mattel had seen a bunch shredded gay men wearing cock rings about their person and assumed that it was just a cool fashion accessory popular with tanned men who worked out a lot. It wasn’t. It was a gay thing that made Ken look really, really gay.

Mattel’s primary audience for the doll were largely indifferent to Ken’s new look, which didn’t stop it from becoming the best-selling Ken doll ever produced. A fact that’s kind of impressive when you realise Earring Magic Ken was only in stores for 6 weeks. Gay men cleared out stock of the doll at every toy store in America and thousands more sent tongue-in-cheek letters of thanks to Mattel about how they were loving the new, more fabulous Ken.

Mattel absolutely hated this and vehemently denied in interviews that Ken was gay, responding to requests for comment from magazines and newspapers with a stock response about Ken being straight. 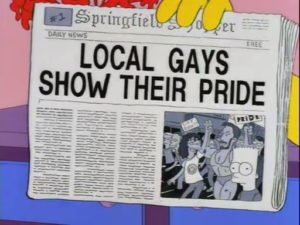 When pressed for comment, Mattel’s head of marketing and communications, Lisa McKendall got incredibly irate about the Ken’s new look, angrily telling an interviewer for the Chicago Reader:

“We’re not in the business of putting cock rings into the hands of little girls.”

Unwilling to endure the ridicule, Magic Earring Ken was quietly pulled from stores making it even more popular because in addition to being known as “the gay Ken” the doll was now a highly sought after collectors item. Hilariously, Mattel is still salty about everyone calling Magic Earring Ken gay and the company refuses to discuss how many of the dolls they sold. Presumably because they’d be forced to admit that Ken was more popular when everyone thought he liked fucking dudes.