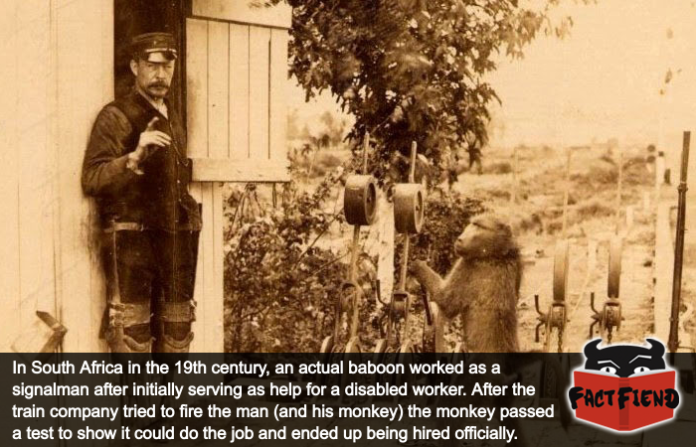 If you were travelling through South Africa by train in the late 19th century there’s a good chance you may have witnessed a synergistic combo of man and beast the likes of which have never seen before or since. A team that consisted of a man with no legs called James Wide and a drunken baboon called Jack who, unbelievably, helped the trains run on time so well that the latter ended up being hired to do the job full time.

For anyone curious about how a man ended up with a beer-swilling baboon instead of legs, the cause was an accident in 1877 that resulted in both of Wide’s legs falling off after they were hit by a train. An accident that is largely thought to have been James’ fault due to his habit of jumping between trains instead of walking whilst working as a guard for the Uitenhage train station in South Africa.

This being the days before things like health insurance or suing the fuck out of your employer, Wide was told to eat shit and summarily fired because it’s kind of hard to chase away trespassers sans legs. In response Wide literally carved himself a new set of legs and hobbled into his boss’ office and demanded they give him another job.

Impressed by his moxie, Wide’s boss gave him a job as a signalman which went great, at first. You see, while Wide was more than capable of pulling a lever or two, getting to and from work was a pain in the stubs which is when he spied a solution in the form of a baboon called Jack.

Specifically it’s noted that Wide saw Jack pushing and pulling a cart in a local marketplace and somehow convinced his owner to hand him over, with Wide expecting Jack to serve as a sort of baboon butler that’d push him from A to B. However, Jack very quickly proved to be a very perceptive primate who was more than capable of performing most, if not all of Wide’s duties. In fact, Jack was even capable of doing Wide’s old job too as he was known to fiercely protect the train yard from intruders, scaring the fuck out of intruders by threatening them with fearsome simian backhands or a good old fashioned monkey maulin’.

Despite doing his job without issue for over a year and only requiring a “tot of cape brandy” as payment for his help, some people were uncomfortable with the idea of a fucking baboon being in charge of 80 tons of screaming steam-powered technology and complained. Resulting in Jack and Wide being fired. Amusingly it would late emerge that officials were aware that Wide had an assistant to help him with his duties, it’s just that Wide had neglected to mention that his help was 50 pounds of brandy-soaked monkey.

Wide wasn’t happy with this and implored officials to test Jack to prove his worth as an employee, which he did, by passing a more comprehensive test than the one given to actual potential train signalman. Presumably as Wide stood just off frame with his arms crossed like a Yakuza boss while being all like “Yeeeeehhh“. 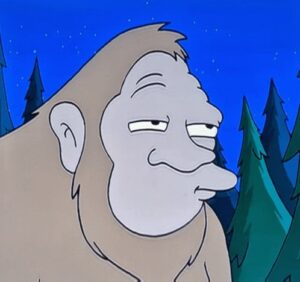 After passing the test Jack was not only allowed to stay, but given a daily salary of about $5 in today’s money and even a bottle of beer at the end of each week as a treat. In return the train-yard got a rabid, drunken monkey that both made sure the trains ran on time and hurled lumps of fetid shit at anyone who tried to steal any of their stuff.