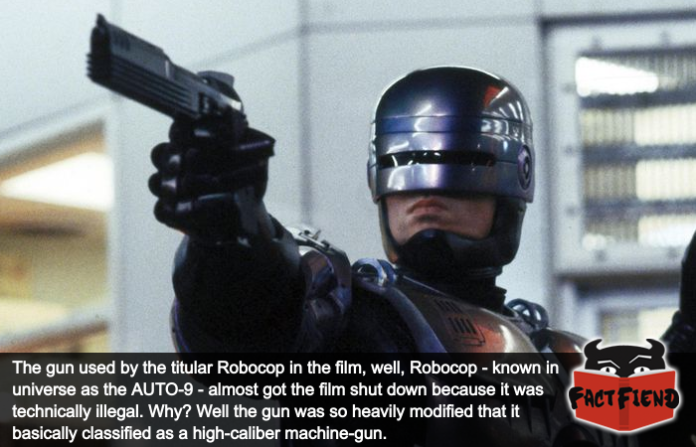 Here at Fact Fiend we love RoboCop and it is our ultimate goal to discuss every element of the film’s production at some point. In that vein did you know that the iconic pew-pew fuck-you gun used by the film’s robotic hero, the AUTO-9, was technically illegal in the United States because the prop makers made it kick too much ass.

Described in universe as the absolute pinnacle of personal firearms technology, the AUTO-9 is quite literally a part of RoboCop, being built directly into his bulky, yet shapely robo-thigh for easy, quick access for those times when he absolutely needs to shoot a guy directly in the shaft like right now.

Boasting a 50-round magazine that can be filled with everything from armour-piercing rounds capable of punching through 8 feet of concrete to flechette rounds that can shred a human torso like a pinata being hit by a train, the AUTO-9 is almost comically lethal. Especially in the meaty, robotic hands of Alex Murphy, in part due to his hyper-advanced robotic reflexes that allow him to do things like ricochet bullets of solid surfaces, hit a target as as small as a rapist’s flaccid penis from half a mile away and even hit enemies stood outside of his field of view while looking as stylish and cinematic as possible.

By far the most infamous feature of the AUTO-9 though is the fact it fires 3 rounds with every pull of the trigger. Something that actually allows RoboCop to kill multiple people with a single burst of fire if he really wants to and behind the scenes caused a whole host of issues for production.

The most immediate issue being that for the sake of continuity and verisimilitude, every time an extra got hit by RoboCop’s gun, they had to use three times as many squibs as they would ordinarily to sell that they were indeed being shot three times. Which, is, well, hilarious. However a more, abstract issue is that the gun itself was technically illegal.

To explain, the AUTO-9 was actually a heavily modified Beretta m93R, with most of the modifications to the gun being made to make it look more aesthetically pleasing in RoboCop’s hands. This was important to production because no real gun production tested looked right in RoboCop’s hands, with even the formidable Desert Eagle looking like a child’s toy when handled by Peter Weller in full RoboCop costume.

As a result, most of the modifications made to the gun were to the barrel and handle, largely to make them bulkier. The important thing to note though is that the gun, at it’s core, was real and did indeed work as advertised. Which was an issue because production souped up the gun so much it technically counted as a fucking machine gun when they were done. Which are subject to very strict regulations in the US, even for film shoots.

According to people who worked on the movie, they had to fill in a metric fuck-ton of paperwork just to get the gun into the country and they were fully at risk of being arrested if they modified the gun any further. A fact we can’t help but find kind of ironic given the film’s message about the over-militarisation of the police and the total lack of paperwork RoboCop seems to do while arresting and shooting people. 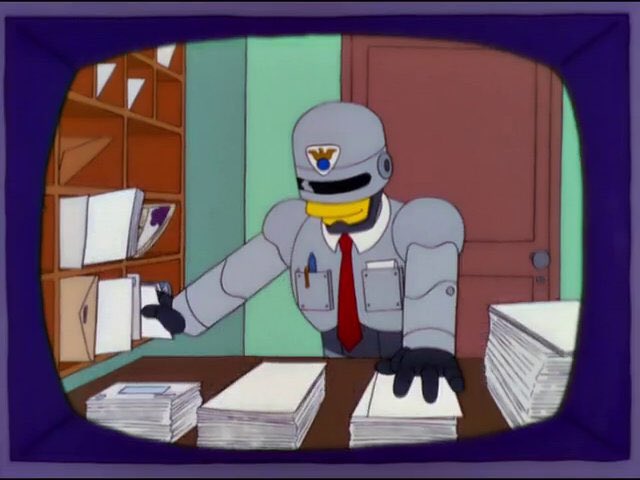