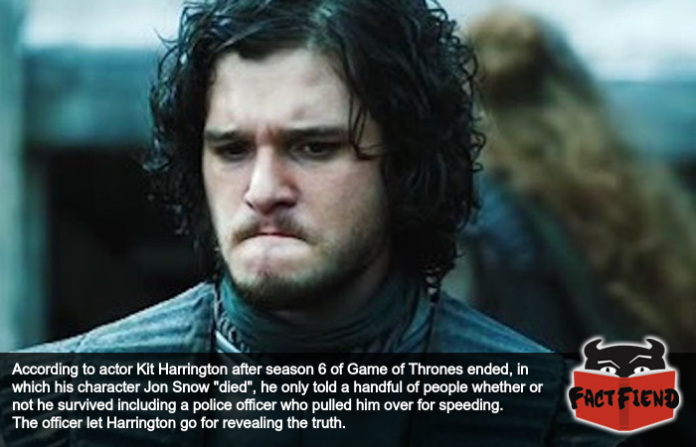 In the context of the Game of Thrones TV show, Jon Snow is a large donged hero known for being one of the baddest motherfuckers in all of Westoros. A legend with a blade to his enemies and his tongue to the ladies, the character is one of the most popular in recent pop culture history. So much so that his death was somehow able to get the actor playing him out of speeding ticket.

To explain, before Game of Thrones committed pop culture suicide in 2019, the show was ridiculously popular to the point the actors on it couldn’t go anywhere without being bombarded by questions about the show. A frustration that, at least in early seasons, was alleviated somewhat by the presence of actor Charles Dance whose towering figure and imposing air basically shut down all discussions of spoilers because people were scared of pissing him off. Which, to be fair, we totally understand given that Dance learned to gut a deer with a Rambo knife for like one scene. 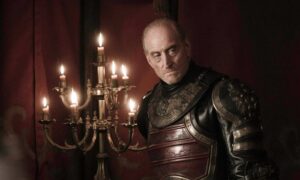 Our favourite anti-spoiler tech though was employed by actor Kristian Nairn who was reportedly always happy to tell fans who approached him spoilers for the show by telling them snippets of his character’s dialogue from upcoming seasons. Something that would have likely been more exciting for fans if his character said more than one word.

Moving on, at the height of the show’s popularity one of the most popular characters on it, Jon Snow (spoilers) gets fucking wrecked at the climax of the 6th season. A shocking twist that would probably represent some kind of finality for the character’s arc in a show without magic and dragons. 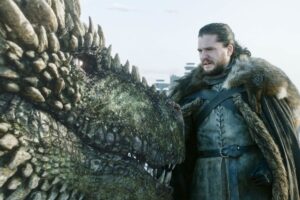 A twist that resulted in Jon Snow actor Kit Harrington spending pretty much every day after the airing of that episode in hiding so he didn’t have to talk about it with fans. Which is understandable because we also don’t like talking about our job with strangers. In fact, according to Harrington he managed to avoid talking to about the show with everyone but his family, girlfriend and a huge fucking nerd who also happened to be a police officer. To explain, in a 2016 interview Harrington revealed that whilst driving home from his parents one evening he went just a little too fast along a country road and got pulled over.

Fortunately for Harrington the police officer was a fan of the show and gave the actor an ultimatum – tell me what happens to your character or I’ll arrest you. Which yes, we know, is very shocking, a police officer abusing their authority for personal gain who’d have thunk it?

Anyway, not wanting to get arrested and deal with all that shit, Harrington told the officer that he was alive in the next season and drove away. A somewhat unsatisfying conclusion to the story that kind of makes us wish Harrington just told the office that his character turned into a zombie or some shit because it’s not like anything he could have said would have been worse than what actually ended up happening to his character.