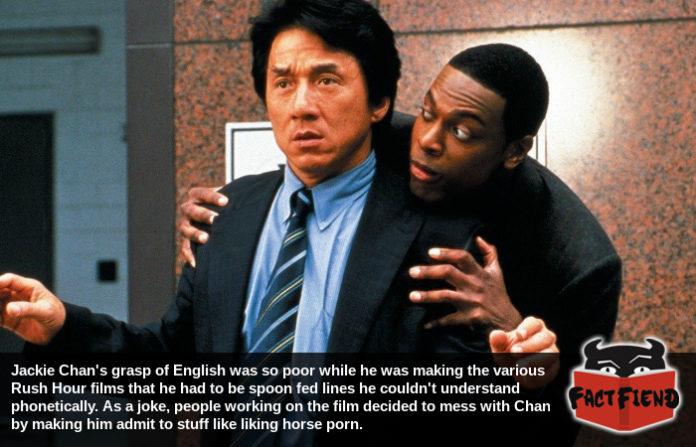 Now although Chan has been appearing in movies speaking English since the 80’s and has even dubbed over a bunch of his own movies, Chan wasn’t fluent in English for many years after arriving in the US in the late 70’s.

Chan initially learned English through immersion, arriving in the US in the late 70’s and basically spending his time absorbing every piece of Western media he could get his hands on. Although Chan reportedly picked up on English exceptionally quickly and could arguably speak the language better than 98% of his co-stars could speak Chinese after only a few months, he still struggled with its finer points.

As a result, for most of his English films Chan had to be coached by the production crew on how to pronounce certain words, resulting in him being spoon-fed most of his lines phonetically.

Most amusingly one of the lines Chan was fed was “I like the ones with the horses“, prompting almost instantaneous scene-ruining and barely stifled laughter from the crew. Chan, sensing something is amiss, breaks character and asks a member of the crew “are you teaching me bad words?” as Chris Tucker totally loses his shit .

Moments later, the exact same thing happens again when Chan is told to admit to liking pornography with hairy women in it.