You now have a choice of enjoying this article in video form if that’s your bag. As per usual, the original article can be found below.

Starship Troopers is one of several Paul Verhoeven movies Hollywood is inexplicably trying to reboot because they apparently didn’t learn anything from the turd-warm reception the Robocop and Total Recall remakes got. Rather thank think about how terrible this inevitable PG-13 remake of an R-Rated classic is going to be, let’s talk about how much test audiences hated Denise Richards.

For anyone who needs a refresher on the movie, the film mostly centres around the adventures of the lantern-jawed beefcake, Johnny Rico and his rag-tag bunch of friends as they attempt to combat a race of giant alien bugs. The film is a thinly veiled satire of fascism, going as far as to model half the cast’s uniforms after those of the Nazi high command. 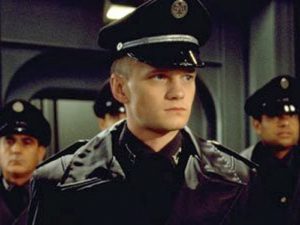 A second plot thread present throughout the film is the relationship between the aforementioned beefcake and his high school sweetheart, Carmen Ibanez, played by Denise Richards.

During the film, Richard’s character breaks up the main character, telling him that she simply can’t focus on all the dick right now because she has to think about her career as a pilot. Minutes later her character begins to flirt with this smug looking sack of asshole.

In early cuts of the film, several scenes were present in which Richard’s characters is obviously conflicted about her feelings for both men, articulating that she loves both, for different reasons. This was completely and utterly scrubbed from the final movie because test audiences fucking hated it. According to Verhoeven, literally every person who watched the early test cut of the movie, regardless of age or gender or even what they thought of the film as a whole, disliked Richard’s character after watching these scenes. The most common complaint being that her character couldn’t possibly love two men at once, something several documentaries we’ve seen at 3AM would contradict, but what the hey.

These same audiences also disliked the fact Richards’ character broke up with the main character to advance her career to the extent several asked for her to be killed off, with one going as far to simply write the words “DIE BITCH” on their comment card. While Verhoeven refused to kill the character off, instead opting to kill off the main character’s rebound fling (which test audiences also hated) he did cut a scene where the two kiss after both of their other love interests have been horrifically murdered by giant alien super-bugs, presumably because our poor little hearts couldn’t take that kind of emotional punt to the dick.