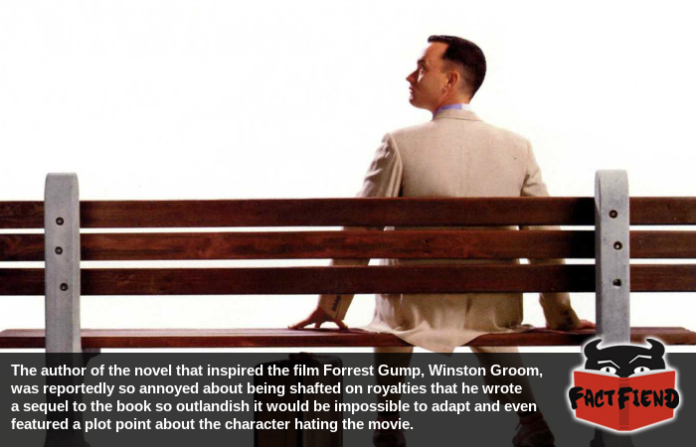 Forrest Gump is a feel-good movie from the 90’s about a mentally deficient man whose childhood sweetheart dies of AIDS. Adapted from a novel with the same name, Paramount Pictures famously screwed over the original author, Winston Groom, when it came to royalties, a gesture he returned by writing a sequel so batshit insane it was virtually impossible to adapt to film, then making them buy it.

To explain, when Groom agreed to sell the rights to his novel for about $350,000 in the early 90’s, part of the deal he inked with Paramount was that he would be entitled to 3% of the eventual film’s net profits. A deal that would have netted the author a very healthy payout if not for something known in the industry as Hollywood accounting. Essentially, a way of cooking the books of movie productions to ensure that they technically never turn a profit so that studios don’t ever have to to honour such agreements.

In specific regards to Forrest Gump, thanks to some highly creative accounting on the backend, on paper, the film somehow lost money despite making well over half a billion dollars on a budget of just $55 million.

This, somewhat understandably, didn’t sit well with Groom who very publicly sued the everloving fuck out of Paramount Pictures. Now while Groom didn’t get any of the royalties he was owed, Paramount did agree to settle out of court, paying Groom an undisclosed amount in damages and most importantly, cutting Groom a seven figure cheque for the rights to the sequel to Forrest Gump. Gump and Co. A book we’re guessing 99% of the people reading this had no idea existed and, if rumours are to be believed, was specifically written as a fuck you to Paramount.

We say this because the novel, which Groom began writing around the same time Paramount stiffed him on royalties, is written from the perspective of Forrest Gump and it directly references the 1994 film. Stating simply, “Don’t never let nobody make a movie of your life’s story“. Hell, the book even shits on Tom Hanks’ portrayal of Gump and you know someone is genuinely pissed when they can be angry at Tom Hanks. 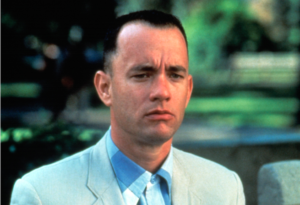 Anyway, the book is infamous for being absolutely fucking insane, doubling down on the idea of Gump bumbling ass-backwards through life and accidentally altering the course of human history. A couple of our favourite examples of this being Gump accidentally crashing the Exxon Valdez oil tanker, inventing New Coke and somehow becoming embroiled in the Gulf War Conflict which he fights in alongside an ape he met whilst working as an astronaut.

Now while many assumed at the time that all of this was just Groom trying to one-up the previous novel, it has since been theorised that the author went out of his way to make the book as convoluted and ridiculous as possible purely so that no studio could turn it into a movie after he was fucked over by Paramount. A fact supported by the numerous jabs at the film present throughout the book and comments from Groom after Paramount were basically railroaded into buying the rights to it to shut him up. Once saying “I’m as happy as a pig in sunshine.” when asked about his thoughts on Paramount paying a seven figure sum for the rights to a novel that directly shat on the film it would be made as a sequel to.

For anyone curious, Paramount did try to turn the book into a usable screenplay, which would have included scenes of Gump meeting everyone from Princess Diana to O.J. Simpson during his infamous slow-speed escape from the police. Hell, there was even going to be a plot point that involved the Oklahoma bombing. If you’re wondering why this sequel that would have directly invoked a semi-recent terrorist attack for a joke never got made, the answer might have something to do with the fact that the script was reportedly completed and submitted for review the day before 9/11. No, really.