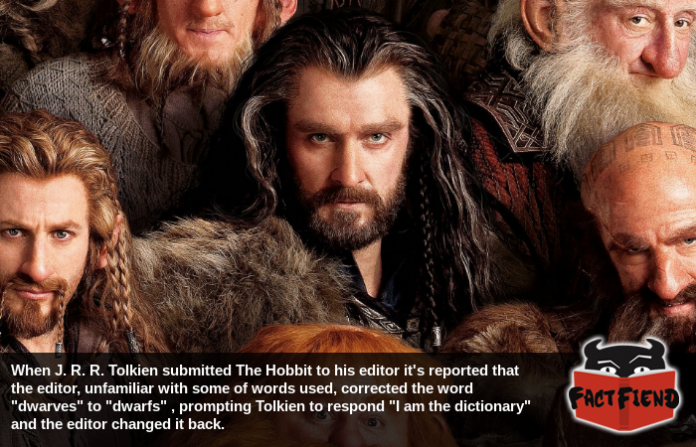 Few authors are responsible for as many contributions to the world of language as J. R. R. Tolkien, which is unsurprising given the Tolkien’s background as a word nerd of the highest order. Perhaps the most curious quirk of language Tolkien is responsible for though is the word dwarves. A word he accidentally made the default plural for everyone’s favourite fictional bearded hammer-swinging mountain dwellers.

First though it’s important to understand just how much of a turbo-nerd Tolkien was in regards to language, with the author famously creating all of the languages spoken by the numerous races featured in the The Lord of the Rings series before he’d even started writing the books. Meaning pretty much the only reason the series exists is because Tolkien wanted to justify all of the time he’d spent making up a language spoken exclusively by 20 foot tall tree monsters.

Hell, Tolkien even invented a form sign language spoken exclusively by dwarves who worked the mighty furnaces of Moria, supposedly created by them out of necessity because the forges were simply too loud.

Speaking of the dwarves, whilst Tolkien didn’t invent the idea of tiny bearded men who were masters of metalwork and mining – with the author reportedly being inspired largely by Norse myth in this regard – he did refine and polish the concept to such an extent that “dwarf” is a default race of the fantasy genre alongside elves. Which he also popularised.

However, here’s the weird thing, despite Tolkien being one of the most famous word-nerds in recent history and the fact he literally invented like a dozen languages complete with dialects and idiosyncrasies for fun for each race features in The Lord of the Rings he made a rather embarrassing error (at least for a philologist as seasoned as him) whilst writing it’s precursor, The Hobbit. Dwarves.

You see, the word dwarves is, well, wrong and the correct plural is and always has been dwarfs. Something Tolkien apparently didn’t realise while writing The Hobbit seemingly acting under the assumption that the plural of dwarfs was dwarves, as it is for certain other English nouns ending in an F like half (halves), wife (wives) or, oddly enough, elf (elves).

In fact, Tolkien was so sure of this that when an editor working on The Hobbit corrected this, telling Tolkien that the Oxford English Dictionary (the closest thing to an authority on the spelling of English words to exist) that the plural of dwarf was dwarfs, the author penned an angry letter back simply saying “I wrote the Oxford English Dictionary!” Which, to be fair, was true with Tolkien being credited as the guy who helped clarify the etymology for the word Walrus.

The thing is though, Tolkien was 100% wrong about this but the sheer confidence with which he ascertained his being correct coupled with the fact he did actually help write the fucking dictionary resulted in his editor backing down. The same can be said of future editors who similarly tried to change the word dwarves as well as other words like elven to their correct and proper spelling. Only for Tolkien to again, insist that they change them back to the way he wrote them citing the length of turgidity of his word-penis as a reason. For the curious about elven, it should really be spelled “elfin” but if the stories are to be believed, Tolkien changed the spelling in his books of that because he didn’t like how it clashed visually with the word elves.

Amusingly, it wasn’t until many years later that a sheepish Tolkien admitted that he’d actually been in the wrong the entire time, noting of the word dwarves that it was a “piece of private bad grammar” that was “shocking” for a philologist to make. By that point though it was already too late and the since The Lord of the Rings books basically introduced the concept of dwarves as Tolkien described them to a mass audience, the spelling stuck. Even though it was, by his own admission, a shockingly embarrassing error for someone like him to make.